While much of the West seems to have turned its back on enlightenment and Humanist values this year, it has still been quite an incredible year for the BC Humanist Association. I think it's a good time to highlight some of the major accomplishments we've had over the past year.

The make focus of our charitable work is on promoting the ideas of Secular Humanism. We accomplish this through this website and our regular meetings in Vancouver.

I'm proud that this last year has seen a diverse set of speakers at our meetings. Some of my favourite were Dr Jim Linville's amusing tour of creation museums, Autumn Reinhardt-Simpson's thoughts on female personhood and former BC premier Ujjal Dosanjh's talk on church and state separation. We were able to make these talks more widely available through our podcast, which we hope to continue to grow into 2017.

We've also had a wealth of content published on our blog and our publications page, either under Creative Commons licenses from The Conversation or with permission from TheHumanist.com.

Our biggest untold stories are behind our Humanist Action campaign, which includes our charitable and philanthropic efforts.

This includes the $7000 our supporters raised in May and June for victims of the Fort McMurray fires.

It also includes the over $25,000 raised to sponsor a Syrian refugee family. After more effort than we expected, we submitted all of the necessary paperwork, translations and forms to the government, and now we have to wait as long as 18 months before we'll be able to welcome the family we've been working with to Canada.

We've also been working behind the scenes with an atheist inmate at local correctional facility who's looking for more secular and Humanistic programming. Our friends with the Fraser Valley Atheists, Skeptics and Humanists are now working with the facility's chaplain to see what we can do.

In March, we wrote to the Abbotsford School District to challenge its long-standing policy of allowing the distribution of Gideon Bibles to Grade 5 students. This challenge attracted a lot of attention in the press and after following up a few more times, the District confirmed in June that it would agree to end the practice.

Following that victory, we learned in November that SD27 was also going to permit the distribution of Gideon Bibles. We sent a letter to the superintendent and, once we put the challenge to the press, the district caved and also agreed to stop the practice.

A special thanks goes out to Kona Morris from Godless Comics for giving us permission to reproduce her tracts if it came to that.

Going forward we'll continue to develop our campaign by investigating the influence of religion in BC's independent schools. We were encouraged in September when, one week after our calls, the provincial government announced a new policy requiring all schools to explicitly include protections for LGBTQ students in their anti-bullying policies.

However, millions of public dollars still go to support sectarian religious schools that discriminate with respect to enrolment and hiring.

This has been a revolutionary year for Canadians who want to seek medical assistance to end their lives. While the government's legislation failed to live up to the Supreme Court of Canada's Carter decision, we're proud of the part we've played in bringing the conversation forward.

Our own analysis suggests over $1 billion in public money went to religious hospitals in BC in 2015. Many of those hospitals refuse to provide assisted dying or abortions. Further, our polling showed over 70% of BC opposes this opt-out for publicly-funded hospitals.

We learned early in 2016 about an atheist nurse who had filed a human rights complaint after losing his job. He had been diagnosed with a substance use issue and required to attend religious based treatment programs, such as Alcoholics Anonymous.

Surprisingly, there's no precedent in Canadian courts saying this isn't okay. So we worked with a local lawyer to ask the BC Human Rights Tribunal to hear the case, as employers and the courts shouldn't be able to coerce people with substance use issues into religious programs.

The case is going ahead (we'll likely hear more in the new year) and we're aware of a couple other similar cases across Canada now.

Our work on this case also gave us the background to present before the BC Legislature's Select Standing Committee on Health in July, during its consultations on how to improve effectiveness in addictions recovery. At that hearing, one MLA suggested prayer's can "help people with all kinds of disorders."

In June, we joined our allies across Canada in launching a Parliamentary e-Petition calling on the federal government to repeal Canada's blasphemy law. We worked hard to push the petition to our supporters in its first weeks and we saw over 1000 people sign it in the first day, and we eventually surpassed 7400 signatures. The petition has now been tabled in the House of Commons and we expect a response early in January. This is probably our best chance to finally get this archaic law repealed.

As part of our efforts to promote the petition, we approached a number of local governments to proclaim September 30 as International Blasphemy Rights Day. After a narrow vote in late September, the City of Victoria agreed and we were able to attract significant media attention to the importance of repealing Canada's blasphemy law as a sign for other, more regressive countries.

All of these efforts took place in part through the broader efforts of the International Coalition to Abolish Blasphemy Laws. As part of that campaign, we joined a global call in June for the Government of Greece to repeal its own law. 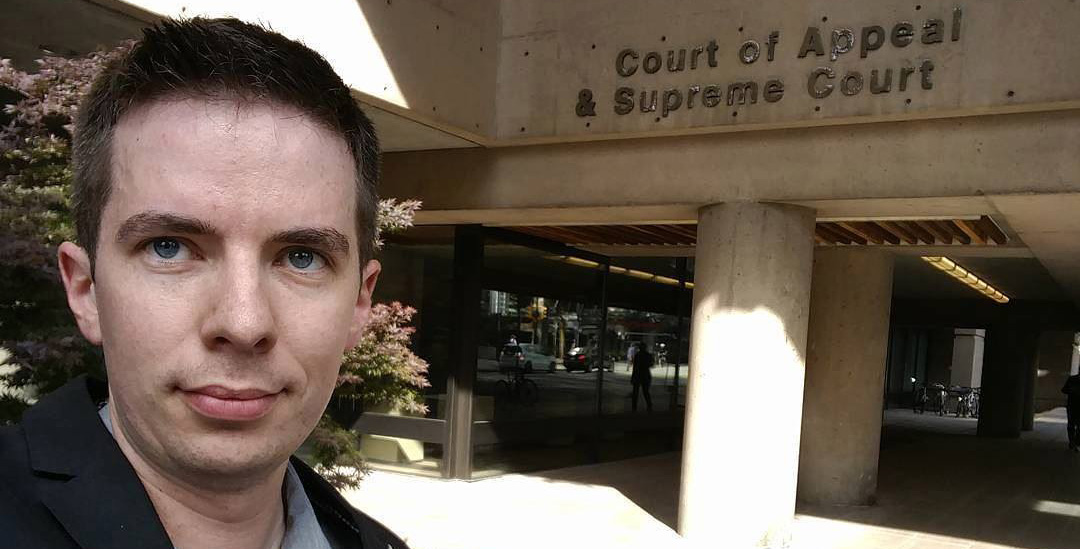 While all of that would be a significant accomplishment for us, given our annual operating budget of under $50,000, we also: 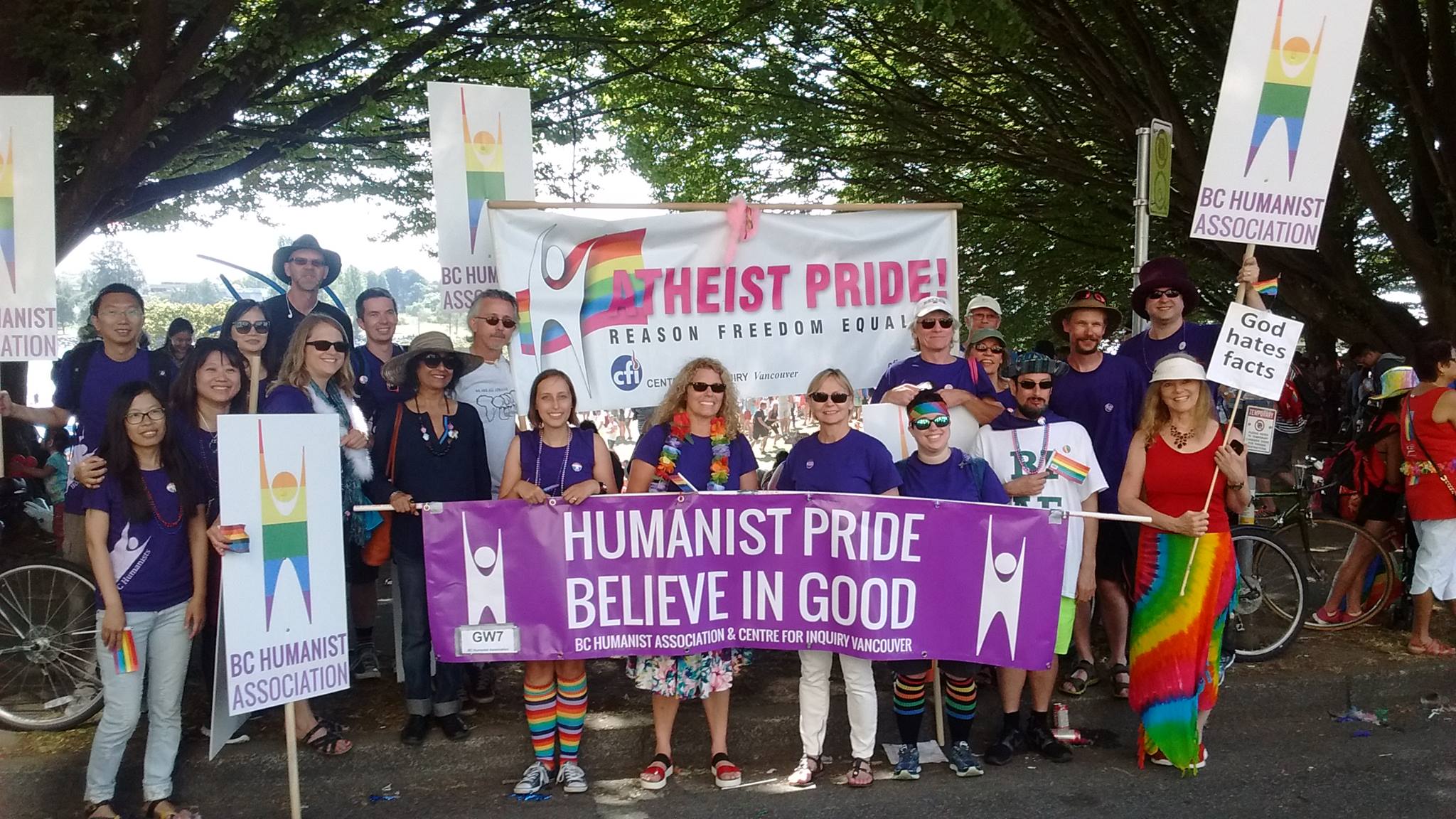 The BC Humanists in the 2016 Vancouver Pride Parade

While looking back at all of this, it's clear there's still a lot more work for us to do. We must keep the pressure on the government to repeal the blasphemy law. We have to continue to challenge the public funding of religious schools and hospitals and support efforts to expand access to assisted dying. We need to make the case to the BC government that Humanist Officiants should have equal standing to perform marriages. And we need to keep up our high quality of educational content and make it more available to groups across BC.

Our supporters have helped us do a lot this year and our fundraising is better than ever - but we still operate on shoestrings. I work part-time from home and am continually struggling to keep ahead of our many ongoing campaigns. Simply put, we need to continue to grow and expand and we can only do that with more regular donors and volunteers.

So please consider becoming a member or a regular donor. And let us know if you're able to donate your skills.

Thank you all for your support in 2016. Happy New Year.