While they receive hundreds of millions of dollars in public funding, private schools in BC are excluding LGBTQ2S+ parents, families and staff; teaching creationism and even banning Halloween and school dances, according to our latest analysis.

There will be no tricks or treats for any of the 40 students at Nelson Christian Community School. The school handbook policy on Halloween states that “due to controversy within the Christian Community” they do not “celebrate nor dress up for Halloween." This small school will receive $232,000 from the Government of BC in the current school year.

One of the larger private schools in BC, Pacific Academy in Surrey has over 1400 students and will receive over $6.5 million.

At Pacific Academy students can be considered for priority registration if they regularly attend a Pentecostal church or if they attend an evangelical church and “have experienced the infilling of the Holy Spirit as evidenced by the sign of speaking in tongues as the Spirit of God gives them utterance (Acts 2:4).”

There are 78 Catholic Schools in BC, with over 23,000 students enrolled. This year those schools stand to receive $83.6 million from the province. A number of the Catholic School Boards in BC require a student's birth certificate as part of the admissions process. Many go farther and require marriage certificates for the staffing application process.

"Sexual identity is rooted in biological identity" (BC Catholic Schools) 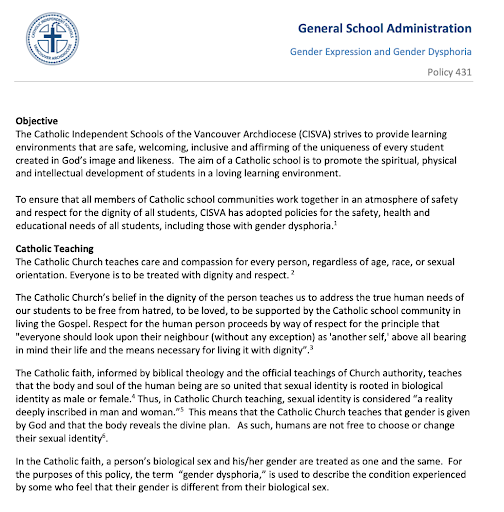 Along with similar hiring and admissions processes, a number of the Catholic School Boards in BC also share identical policies that seek to provide guidance on accommodating students when it comes to “Gender Expression and Gender Dysphoria.” Unfortunately, this policy is prefaced with an introduction to Catholic teachings on gender that undermines the experiences and needs of the students they claim to support.

Since 2016, all Independent Schools in BC have been required to have a policy in place to address Harassment and Bullying Prevention, including protections for students based on their sexual orientation and gender identity and expression. Many schools adopted a policy formulated using material from the Federation of Independent Schools of BC (FISA), the main lobby group for private schools in the province.

Unfortunately, this standardized policy includes a general commitment to protection from bullying based on a number of identities (such as gender, religion or sexual orientation) with the caveat that policies remain "consistent with the independent school’s faith-values, cultural perspectives and philosophical values”. Given that a number of school’s teach beliefs that are inherently discriminatory (such as opposition to same sex marriage), characterizing them as religious values that may be upheld at the expense of the wellbeing of students they target completely undermines the policy.

Many Independent Schools require students, parents and staff sign codes of conduct or community contracts. At Kootenay Christian Academy, the “Parent’s Code” has parent’s acknowledge “that the Bible places primary responsibility on parents, especially fathers, for the education of their children”. The Academy will receive $770,000 for the nearly 150 students enrolled there. 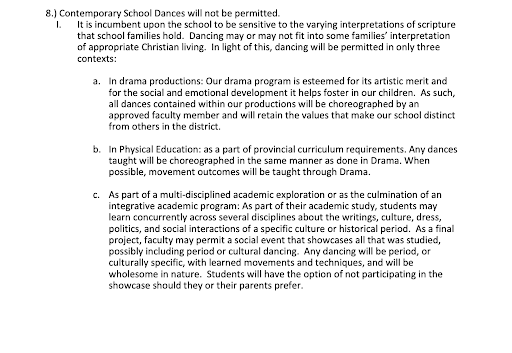 Straight out of “Footloose”, Maranatha Christian School does not allow “Contemporary School Dances” because they recognize that “dancing may or may not fit into some families’ interpretation of appropriate Christian living”. Luckily, the Student Handbook outlines three appropriate contexts for dancing: drama productions, physical education or cultural education.

Maranatha Christian is a small school of 113 students in Williams Lake. Nevertheless, it still stands to receive over $675,000.

Pleasant Valley Christian Academy students should leave their tarot cards at home. The school handbook states that “horror, occult, or violent comic books, figures, clothing, and other associated materials should not be brought or worn to school.

Mental illness in the family (Seminary of Christ the Kings)

Requiring the parent’s marriage certificate might seem like the strangest part of a school’s admissions process; however, Seminary of Christ the Kings’ application form asks if students if any member of their family has “been mentally ill?” and if so to elaborate. If an employer can't probe your personal medical information, it seems a bit suspect that a school can.

There are 46 Catholic schools in the Catholic Independent Schools of Vancouver Archdiocese (CISVA), which extends from Powell River to Chilliwack. Over 13,500 students are enrolled in these schools and the Board stands to receive over $63.5 million from the provincial government.

The CISVA curriculum outlines content covered in their “Christian Education” courses from Kindergarten to Grade 12. Included in lessons on “Discipleship” or “Doctrines of Faith” are Catholic teachings on sexuality, gender, contraception, abortion and the numerous other topics listed in the Catechism or Theology of the Body. For example, students are expected to "evaluate the benefits and challenges of living a chaste life."

None of the content in the "Sexuality and Your Child" curriculum describes contraceptives or birth control but rather focus entirely on chastity and abstinence. Such programs are "fail our young people" by failing to provide adequate information.

While banning school dances or Halloween is probably harmless, these schools all highlight ways in which public funds are being used to support teachings and policies that undermine pluralism and tolerance in the province. If you haven't yet, take the time to write to your MLA and ask them to end the private school giveaway.