A new analysis from the BC Humanist Association shows that nearly three of every four dollars of the over $400 million that the province gives to private schools goes to religious schools; nearly all which are Christian or Catholic. And of the 19.6% of the funding ($83.6 million) that goes to secular private schools, the majority ($44.5 million or 53%) goes to elite schools.

The Government of British Columbia funds Group 1 private schools at 50% of the rate of neighbouring public schools, while Group 2 schools receive a 35% stipend (see note). While both groups are free to supplement the BC curriculum with religious materials, Group 1 schools are required to operate at or below the per-student cost of local public schools. Without the limit on costs, Group 2 schools often charge prohibitive tuition fees.

Analysis by the BCHA shows that the Government of BC will give $425.5 million to private schools for the 2021/22 school year, funds that could otherwise go to support the public education system. If BC maintained funding for the Indigenous schools and Group 1 secular schools (many of which are claimed to be designed to serve students with special needs), the province could still redirect $341.2 million to the public system.

Through a letter writing campaign being launched today, the BCHA is asking supporters to write their MLAs to ask them to end the private school giveaway. 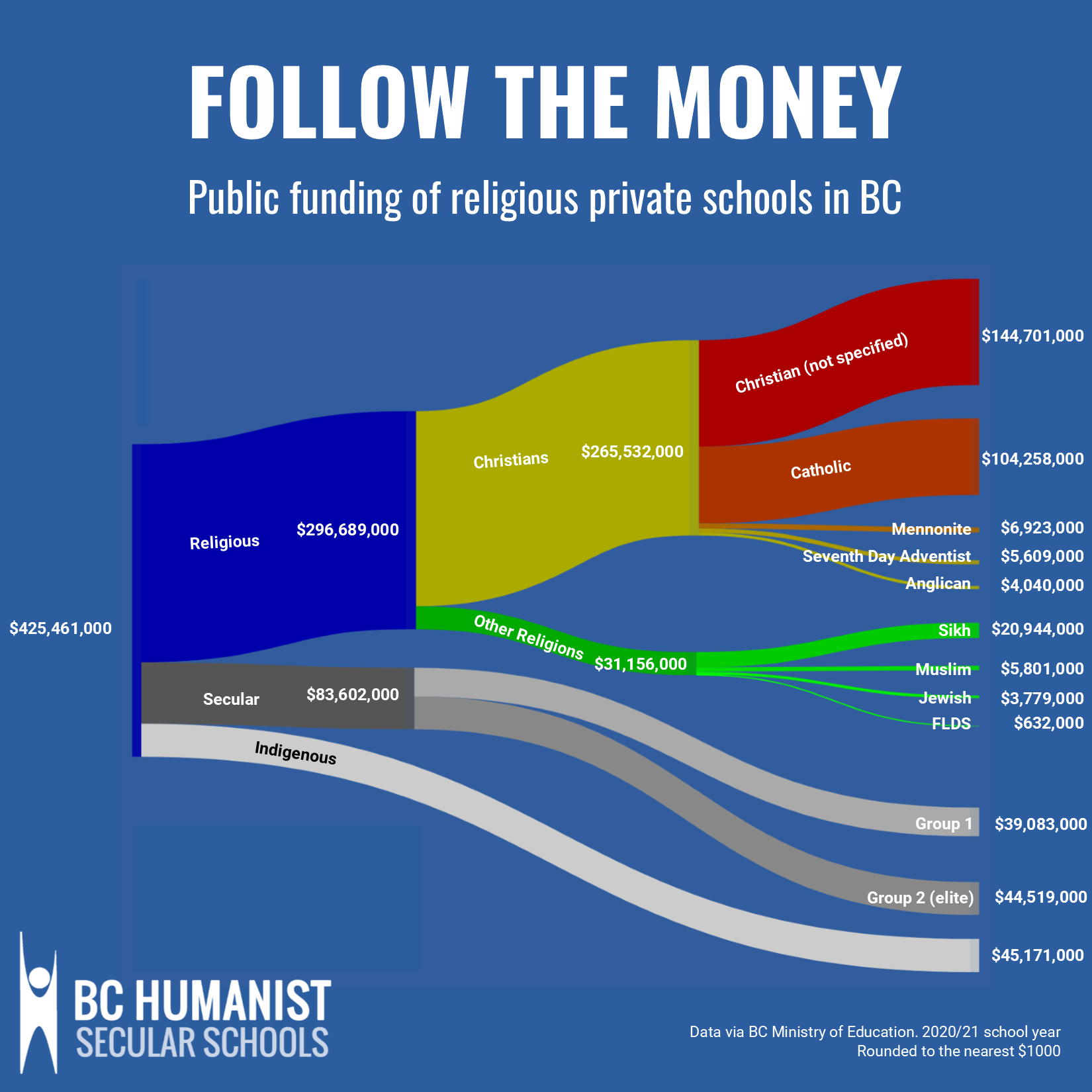 Using information on their websites, the BCHA research team categorized each of the 373 independent schools in BC by their religion. Then, using the Ministry of Education’s enrolment data and per-student grant amounts by district, we were able to tabulate the amount of funding provided to private schools by their religious identity (if any) and group classification.

The researchers classified schools with no obvious religious identity as secular. These schools will receive $83.6 million or 19.6% of all funds. The majority of this funding, $44.5 million or 53.3%, will go to elite Group 2 schools, despite the fact those schools receive a smaller per-student stipend.

Send an email to your MLA now

Note: On September 9, 2021 these data were re-calculated based on updated information regarding the funding of Indigenous independent schools, all of which are classified as Group 2 schools but most of which are granted a 100% subsidy based on the Independent Schools Act Regulations. Additionally, one Indigenous school was misclassified as a secular school.