While they receive hundreds of millions of dollars in public funding, private schools in BC are excluding LGBTQ2S+ parents, families and staff; teaching creationism and even banning Halloween and school dances, according to our latest analysis.

In the first part, we looked at schools teaching creationism in science classrooms. In this second part of our three-part series, we look at schools that exclude same sex couples by defining marriage as exclusively between a man and a woman.

Like public schools, all private schools in BC are subject to the Human Rights Code and are required to include explicit protections for sexual orientation and gender identity and expression in their anti-bullying policies. However, we identified a number of schools that receive public funding and maintain policies that effectively exclude LGBTQ2S+ students, staff and families.

Many of these policies are reminiscent of Trinity Western University's former Community Covenant. The Supreme Court of Canada ruled that the law societies in Ontario and BC were justified in rejecting that school's application for a law school as "Being required by someone else’s religious beliefs to behave contrary to one’s sexual identity is degrading and disrespectful." 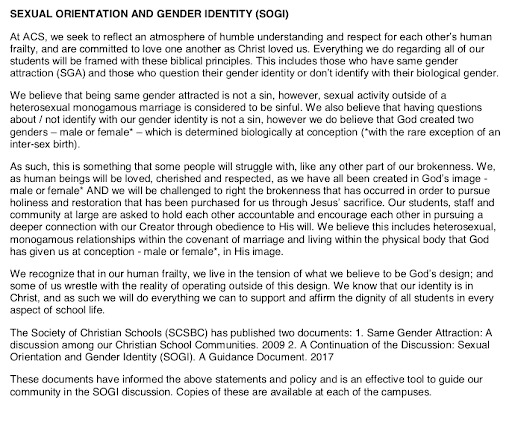 Abbotsford Christian School will receive just over $5 million for the current school year.

Their education policy states that "sexual activity outside of a heterosexual monogamous marriage is considered to be sinful." The policy also states, "God created two genders - male and female* - which is determined biologically at conception (*with the rare exception of an inter-sex birth)."

This policy suggests people who don't fit the school's narrow definitions of sexuality and gender are "broken" and that "students, staff and community at large" should "hold each other accountable."

It's seemingly hard to reconcile how one can simultaneously oppose bullying based on sexual orientation and gender identity and expression on the one hand and a requirement that students and staff pressure people who are not heterosexual or cisgendered to repress their identity. 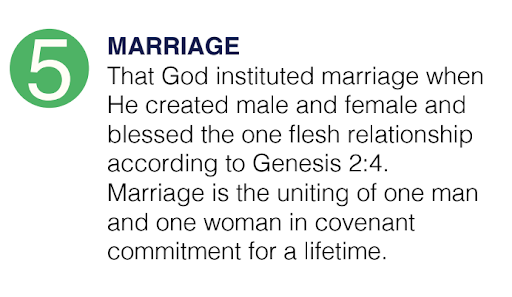 This online school will receive approximately $3.3 million this school year.

Their handbook says God "created male and female" and defines marriage as "the uniting of one man and one woman in covenant commitment for a lifetime."

Such a policy obviously excludes same-sex couples but may even exclude those who are divorced.

This Abbotsford school will receive over $900,000 this year.

Their application form includes a Statement of School Philosophy that places "moral excellence" as one its four focus areas. They define a family as "one man and one woman in a married relationship." 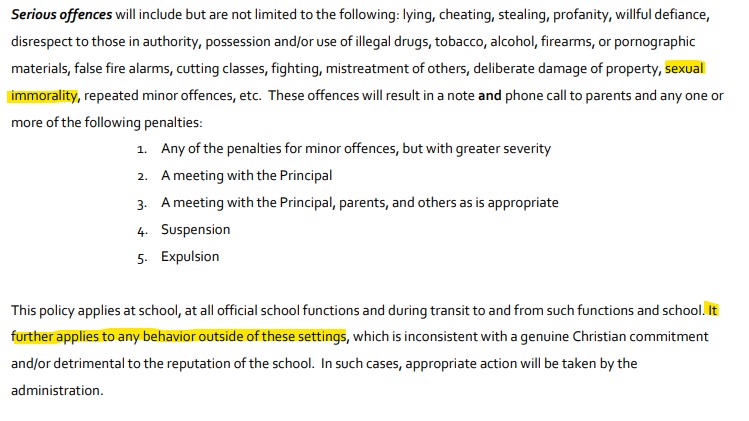 The form goes on to state that "sexual immorality" is considered a "serious offence" in the schools discipline policy, which could lead to suspension or expulsion. This includes behaviour outside of the school.

Putting it together, this suggests the school is willing to police students' relationships even outside of the school setting; arguably invading their privacy. 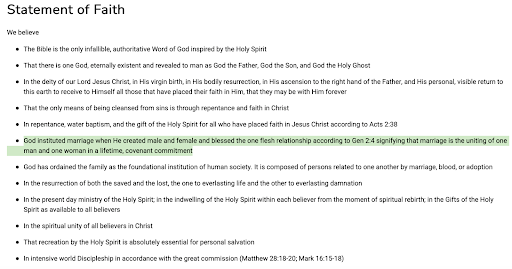 Christian Homelearners eStreams is yet another online religious school. They will receive just under $2.5 million this year.

Their Statement of Faith says God "created male and female" and that "marriage is the uniting of one man and one woman in a lifetime, covenant commitment."

Finally, Pathways Academy is another homeschooling option, which will receive just over $1.5 million for this school year.

Their Statement of Faith states that "marriage is the holy union of one man and one woman."

This was not an exhaustive list of schools we found to exclude same sex marriages or to use a transphobic view of gender. We'll profile a couple more in the final installment of this series.

These schools also build on those we identified in our previous review of private school websites in 2018. Back then we found a number of other schools that with policies that left us wondering about the place of LGBTQ2S+ staff and families in those schools.