Are LGBTQ2+ families welcome at BC independent schools?

Are LGBTQ2+ families welcome at BC independent schools?

In the past couple days it has come out that anyone in a same-sex relationship is formally barred from working at a Catholic school in Calgary. Further, in a number of human rights complaints, teachers have alleged anti-LGBTQ2+ discrimination by Catholic school boards in Alberta.

While Alberta's Catholic schools are entirely funded by the province, there is no reason to expect many of BC's faith schools (which typically receive half of their funding from the province) are any different.

To investigate this, I went looking through schools' websites to see if they had policies that might reasonably be interpreted as excluding LGBTQ2+ staff or students, or students whose parents are in a same sex relationship. It's also worth mentioning that since December 31, 2016, the BC Government has required all independent schools to include specific references to sexual orientation and gender identity in their anti-bullying policies. However, this requirement does not preclude schools from excluding LGBTQ2+ staff, students or parents.

Once again, it doesn't take long to find some pretty clear language. While none of these schools have been confirmed to have excluded any LGBTQ2+ staff or students, the policies do raise questions about how welcome LGBTQ2+ families are there.

As part of its community standards, Abbotsford Christian School requires that "members, students, board members, committee members, administrators, teachers, and support staff are to live out their lives in the school community:"

It's pretty hard to reconcile how anyone in a same-sex relationship or who has an abortion can qualify under these criteria.

Perhaps telling in its omission, the Student Handbook of King's Christian School in Salmon Arm reminds students that "Relationships with the opposite sex will reflect modesty and self-control." Undoubtedly administration are not welcoming toward uncontrolled and immodest same sex relationships.

Nanaimo Christian School's Community Standards Policy is aimed at "teachers, administrative staff, board and committee members and Society members," which does not necessarily include parents or students. However, as part of the application process, parents must confirm "acceptance that their children will submit to all school policies and values."

Surrey's Pentecostal Pacific Academy is infamous for giving priority to applicants who can speak in tongues. Its "Statement of Family" also says "marriage is between a man and a woman."

This definition is referenced in the "Parent's Code" that commits parents to model "Christian marriage" in their personal lives.

Little Flower Academy, an all-girls Catholic High School in Vancouver, was the subject of some controversy in 2010 after a music teacher said she was fired for applying for parental leave after disclosing she was in a same sex relationship.

Following a human rights complaint, the body that oversees Vancouver's independent Catholic schools adopted a policy on "Gender Expression and Gender Dysphoria." While the policy should be commended for setting out accommodations and privacy protections for "students with gender dysphoria, or whose gender expression is non-conforming", the policy begins with a section on Catholic Teaching which says:

In the Catholic faith, a person’s biological sex and his/her gender are treated as one and the same. For the purposes of this policy, the term “gender dysphoria,” is used to describe the condition experienced by some who feel that their gender is different from their biological sex.

While this language doesn't preclude trans students from Vancouver's Catholic schools, it sits in tension with the remainder of the policy that provides tangible protections. 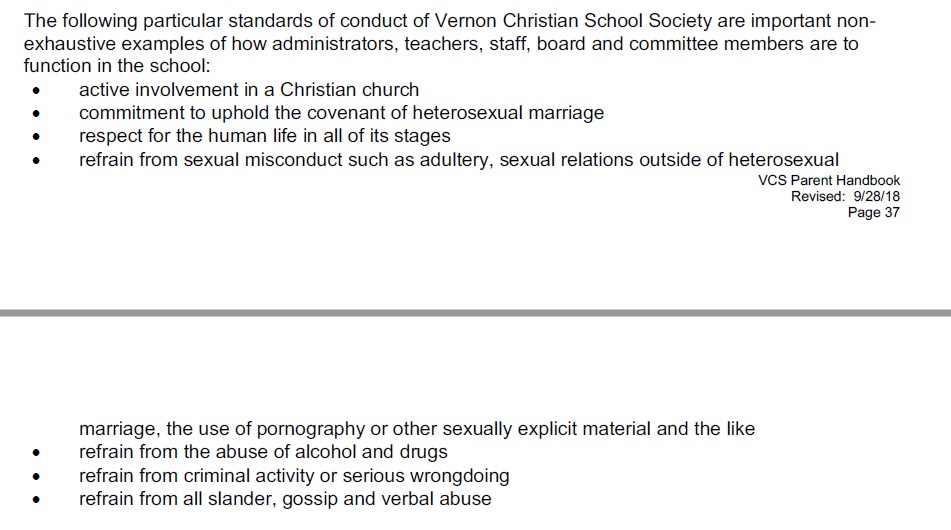 The Academy's admission package asks parents to sign to confirm that they "understand that the school reserves the right to dismiss any student who does not respect the standards of the school or cooperate in the education process."

Two of the previous bureaucrats in charge of the department responsible for overseeing BC's independent schools were previously administrators at White Rock Christian Academy.