BC subsidizes the teaching of creationism in science class

BC subsidizes the teaching of creationism in science class

Spend a bit of time looking through the websites of some of BC's independent schools and it's easy to find schools that proudly teach Biblical creationism alongside evolution in science classrooms.

Independent schools that receive public money are required to teach the BC curriculum, which includes the scientific reality of evolution in Grade 7 Science and Life Science 11. However, as we've shown most independent school funding goes to faith schools.

The following schools seem to arguably undermine that curriculum by "teaching the controversy," a creationist strategy intended to undermine evolutionary science in American high schools.

The most prominent example is Valley Christian School, based in Mission BC. On its FAQ page, the school states that "creationism is taught in science class."

Caver was a partnership between Vancouver Christian School and John Knox Christian High School, and Carver students will be split between them in 2018. In 2009, Carver principal Paul Tigchelaar told BC Christian that both creation and science "get equally fair chances in our schools" and "yes, we teach creation" including models of young earth creationism.

Further, in its January 31, 2018 newsletter, five students describe hearing Biblical accounts of the Big Bang and evolution in their Grade 10 Science Honours class. 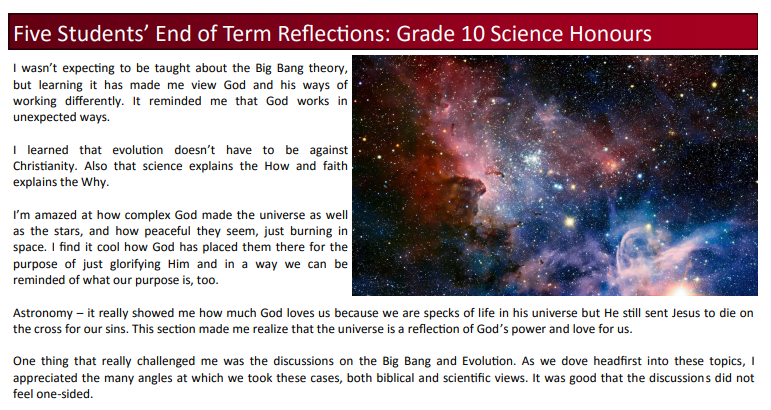 Heritage Christian Online School owns onlineschool.ca and describes itself as "a ministry of Kelowna Christian Centre". The school posted a note about its Biology module of Science 7 that states the topic of evolution "has been intentionally written from a neutral standpoint" and that it does not "take a stance on whether [evolution] is correct."

The school describes its Biology 11 course as "founded on a Biblical worldview" and says that students will compare "ideas about of creation and evolution."

Biology 11 at Kelowna Christian School includes "an in-depth study of evolution/creation." The school taught 678 students in 2017-18 and received $1.2 million in funding.

Topics covered in Langley Christian School's Biology 11 class include "creation, evolution and adaptation." The school taught 1071 students in 2017-18 and received over $4.6 million.

In 2010. the Kamloops Centre for Rational Thought filed a complaint with the Ministry of Education claiming the school taught creationism in science class. The school's principal said independent schools have the right to teach both creationism and evolution. A Ministry spokesperson said at the time that the school was meeting its commitment to teaching the BC curriculum.

266 students were enrolled in Kamloops Christian School in 2017-18 and the school received $1.2 million.

Anchor Academy provides homeschooling through three programs: Distributed Learning, an International Program that uses the Accelerated Christian Education (ACE) curriculum  and a registered homeschool program. The DL program receives 63% of the of the public school rate and parents choosing the International Program or homeschool options are eligible for a $150 grant per student.

ACE is a creationist program that has also reportedly downplayed slavery and apartheid in South Africa. It also provides a "College Bible and Science" class within its "Natural Science Division" that promotes creationism. Further, an "Origins Science 11" class includes creationism. 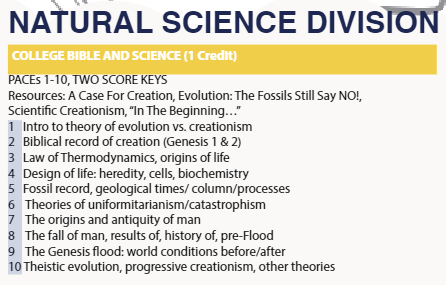 In the near future, I am anticipating the victory of the reality of Creation and our Creator to replace the confusion of evolution, "Santa Claus science", in the minds of many children in our province.

These examples are what can be found fairly quickly on the websites of independent schools that receive tens of millions of dollars from the BC Government. Beyond this, we've also heard from people across BC about science teachers in independent schools presenting religious opinions as fact in the science classroom.

Our Kids, a directory of Canadian private schools, claims that of the 157 schools in its database that only 55% teach "evolution as consensus theory." Of the 24 religious-affiliated schools on its list, a majority either teach creationism alongside evolution (41%) or don't teach evolution at all (14%).

The Government of BC has previously stood up for the teaching of evolution in public schools, which raises the question of why we're not holding independent schools to the same standard?

Alternatively, perhaps it's time the province got out of the business of funding religious schools altogether.