Looking back on the Abbotsford creationism battles

Looking back on the Abbotsford creationism battles

All schools and Provincial schools must be conducted on strictly secular and non-sectarian principles. The highest morality must be inculcated, but no religious dogma or creed is to be taught in a school or Provincial school.

This section of British Columbia's School Act was written in 1876 and is, as far as I know, unique in Canada for explicitly establishing the school system as secular.

Nevertheless, it was in Abbotsford, BC where the biggest controversy over teaching creationism in Canadian science classes occurred. Today, we're re-publishing Melissa Story's four part series on Creationism in Canada that tells that story.

Her blogs detail the Abbotsford School Board's requirements that teachers "teach the controversy" and present Christian creationist speakers as scientific authorities in high school biology classrooms. Following pressure from the press and members of the BC Civil Liberties Association and National Center for Science Education, the Ministry of Education forced the district to amend its policy and keep creationism out of science classrooms.

While the debate over creationism in the science classroom was effectively settled in BC in 1996, it's worth revisiting that debate as we're arguably entering a new era of classroom culture wars.

The battle lines today are no longer around creationism but once again they do mirror the more visible reactionary forces at play South of the border. And as before the first clashes in BC are in the Fraser Valley. 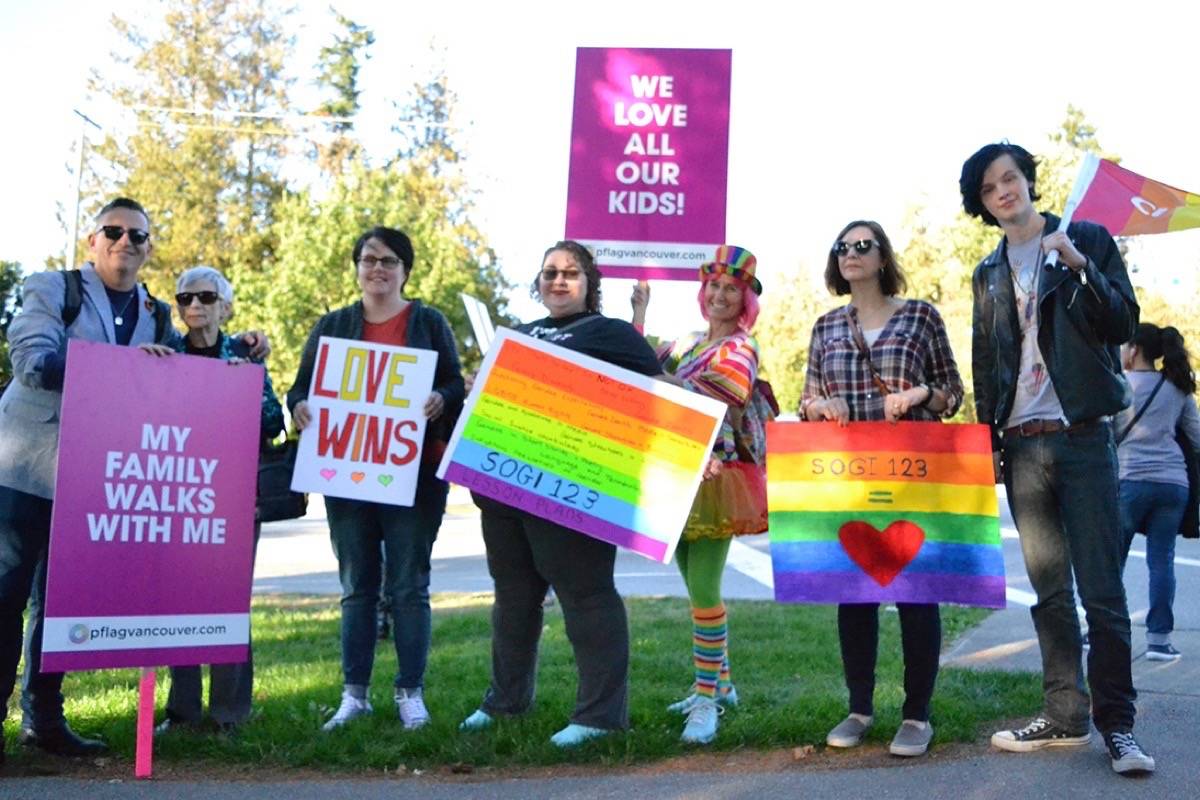 Rally in support of SOGI 123 in Langley, Surrey Now Leader

In Langley and Chilliwack, conservative religious groups have been trying to subvert new tools and resources that are being rolled out to promote LGBTQ-inclusive education. Unsurprisingly, we can see the same tactics that were used to promote creationism being used to attack the SOGI curriculum.

Trans rights and inclusive classrooms aren't the only front in the new culture wars. We've already seen racist anti-immigrant rhetoric in the USA, instances of anti-Muslim and anti-indigenous bigotry across Canada, attacks on science and academia, and resistance to efforts to end gender-based violence.

In this light, it's worth returning to what Humanism is and what we stand for.

Humanists were passionate about the creation battles because we value science, freedom of inquiry and education free from indoctrination. But beyond that, Humanists supports human dignity and autonomy and rejects regressive, nationalistic and authoritarian ideologies. This is at the cores of every manifesto and declaration.

Humanism is ethical. It affirms the worth, dignity and autonomy of the individual and the right of every human being to the greatest possible freedom compatible with the rights of others. Humanists have a duty of care to all of humanity including future generations.

Aside from affirmations and manifestos, we can see Humanist organizations actively championing human rights - and the LGBTQ community in particular - across the world. Humanists UK operates LGBT Humanists, the American Humanist Association campaigns on LGBTQ issues and supports the LGBTQ Humanist Alliance.

So let's take the lessons we can learn from the creation battles as we stand in solidarity with everyone whose dignity is under threat.