Who reaps the most rewards? The landscape of independent school funding in BC

Who reaps the most rewards? The landscape of independent school funding in BC

Christian and Catholic groups are receiving a disproportionate amount of BC's Independent School funding, according to an analysis released by the BC Humanist Association today.

Last week we showed how BC's Office of Independent Schools has been overseen by evangelical Christians for three decades. So it's not surprising to see hundreds of millions of dollars go to Christian and Catholic schools in greater proportion than one would expect from the religious demographics of the province.

23% of British Columbians identified as Christian or Catholic in a 2016 poll by the BCHA (or 45% in the 2011 Census). However, 62% of the $358 million dollars given to independent schools went to Christian and Catholic schools in the 2017-18 school year.

A list of BC's independent schools, their corresponding school district and enrolment was downloaded from the Ministry of Education's website. The data for funding rates by school district for 2017-2018 was also downloaded. We derived an estimate of the subsidy paid to each school by combining these data in a spreadsheet.

Individual schools were then categorized by religion by examining their websites and public materials. Schools categorized as "secular" did not clearly identify a connection to a faith group. Indigenous independent schools, while not necessarily religious, were categorized separately. Because of the small numbers of many denominations, Christian schools were grouped together. This included schools that defined themselves merely as Christian and Protestant denominations such as Lutheran, Anglican and Pentecostal schools. Other schools included Mennonites, Muslims, Seventh Day Adventists, Jewish and Fundamentalist Church of Jesus Christ of Latter-Day Saints. Each faith group in the "other" category had fewer than 1500 students enrolled in all of their schools.

For the 2017-18 school year, the Government of BC reported 365 registered independent schools, with a student population of 87,011 students. These schools received a total of $358,028,514 in provincial funding. 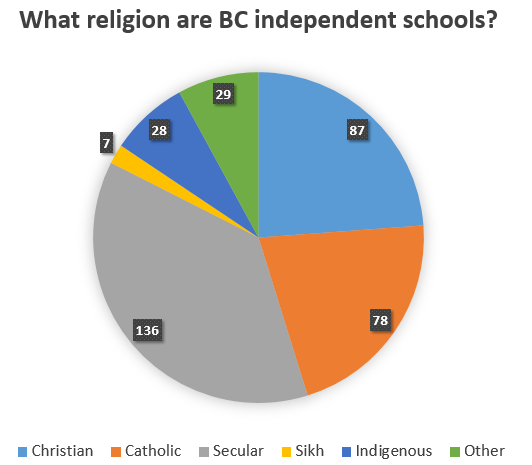 By religion, the plurality of independent schools were Christian (87) or Catholic (78). Another seven schools were Sikh. Of the other religious groups, ten were operated by Seventh Day Adventists. Mennonites, Muslims and Jewish groups operated six schools each and one school (Mormon Hills Elementary and Secondary) was run by the Fundamentalist Church of Jesus Christ of Latter-Day Saints. As most religious schools were group 1, it's no surprise then that the majority of funding goes to Christian ($125M) and Catholic ($100M) schools. 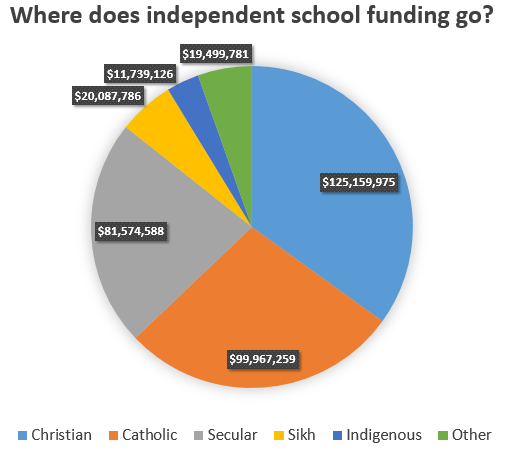 Of the 87,011 students who attended an independent school in 2017-18, over 50,000 went to either a Christian or Catholic school. Nearly 25,000 attended a secular school while under 5000 attended each of the other categories. 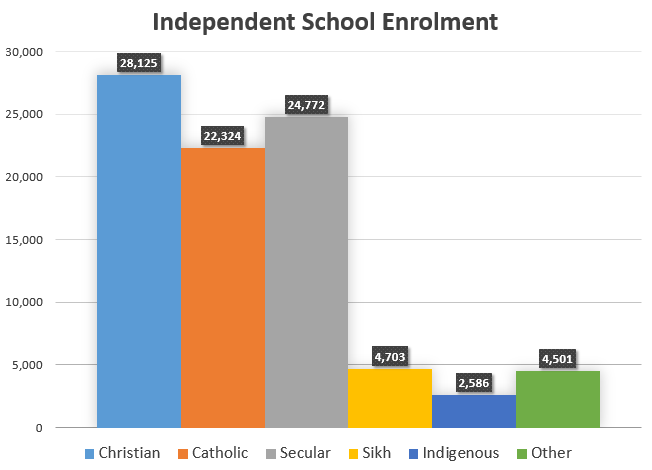 Most group 2 schools were either “elite” secular schools (41) or indigenous schools (28). There was one Christian and one Sikh group 2 school with a combined student population of 121.

Among the 44 group 3 and 4 schools that received no provincial funding, 27 were secular. This amounted to 2276 of the 2696 students. Ten Christian schools had a total enrolment of 292. Another 5 Mennonite schools educated 71 students, one Muslim school taught 48 students and one Jewish school had only nine students.

In comparison to the distribution of funding above, we found in 2016 that 6% said they were Catholic and another 17% identified as another kind of Christian and 4% were Buddhist, despite the fact we found no Buddhist independent schools in BC. Only those who said they practised a religion or faith were asked what their religion was. 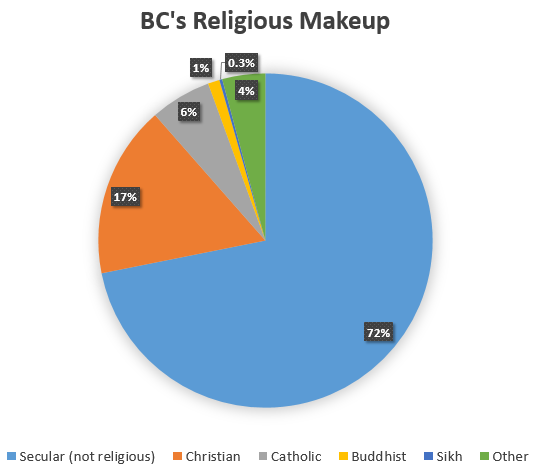 According to the 2011 National Household Survey (which replaced the mandatory long-form census that year), 44% of British Columbians had no religion, 30% were Christian, 15% Catholic, 5% Sikh and the remaining 7% were other religions. 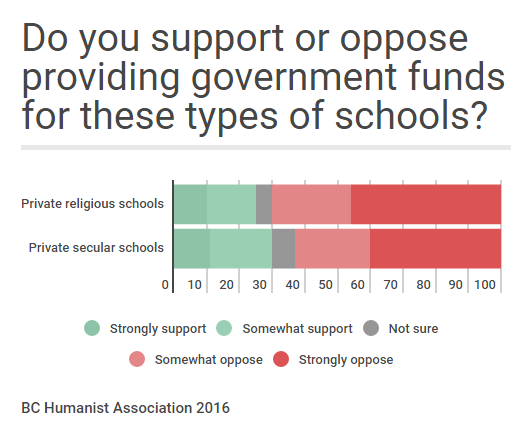