Despite the change in government in 2017, the handout of public funds to private schools has neither decreased nor even slowed down.

As we recently showed, this funding largely goes to religious and elite private schools. These are schools that segregate students on the basis of their parent's faith and socioeconomic status.

Using data from the provincial government's budget estimates, our latest charts show that private school funding has grown from $358 million in 2016/17 to $473 million in 2021/22. 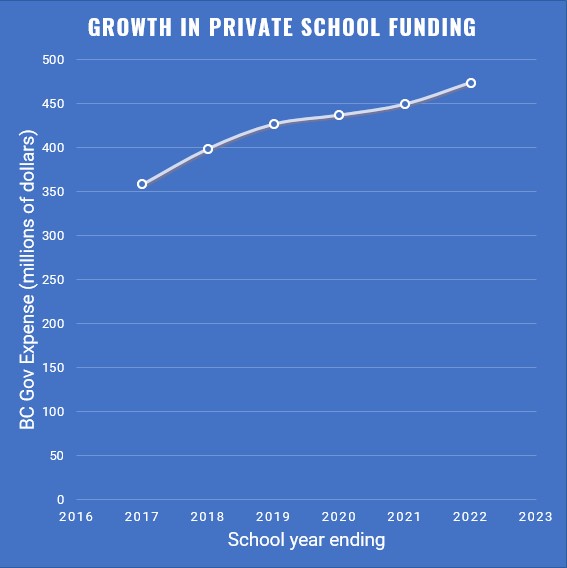 This is an increase of 32% in five years. And it's greater than the 28% increase in funding to public schools over the same period. By comparison, the Bank of Canada reports that the Consumer Price Index only increased 9.3% between 2017 and 2021. 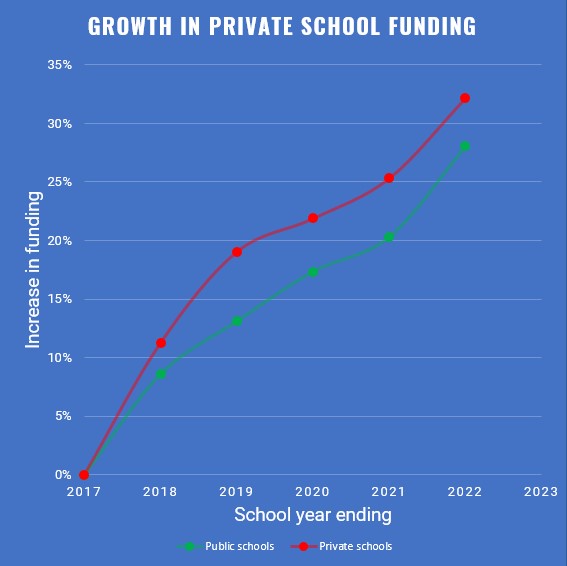 The Government of BC ties most education funding to enrollment through a per student grant. This means that funding changes largely reflect changes in enrolment plus any overall increases in funding to keep pace with inflation and demands on the system.

Under the current formula, private schools receive either 35% or 50% of the per student grant that a public school receives. The current government has largely left those amounts unchanged since taking office, with the exception of bringing the grants given to private online schools in line with in person schools.

The disproportionate growth in private school funding shouldn't simply be explained away as a trend toward greater private school enrolment. Rather, we can see it as an indictment on a government and a society that often touts its support for public education but has arguably failed to create a truly inclusive system. Justly or not, the reality is some of those parents who can afford to have decided that private school is a better option for their children than the public system.

But these trends don't justify the continued subsidy, particularly as we have shown it largely goes to religious and elite private schools. If the Government  ends this handout, it can redirect hundreds of millions of dollars toward making our secular system even more inclusive.