Opinions expressed on the BC Humanist Association's blog do not necessarily reflect those of the BCHA or the Board of Directors.

Why conversion therapy and ex-gay ministries should be outlawed

posted by The Conversation
November 13, 2018

“Pray the gay away” is shorthand for Christian programs that, disguised as love, purport that God heals homosexuality. Through the lens of sexual sin, homosexuality is construed as something in need of healing, a disease in need of a cure, an error in need of remedy.

Secular versions are known as conversion therapy, as described in detail by Peter Gajdics in his memoir, The Inheritance of Shame. The book details his experiences with “ex-gay” counselling during the late 1980s and early 1990s.

posted by The Conversation
November 01, 2018

After Robert Bowers murdered 11 people at a synagogue in Pittsburgh, people are looking for explanations. Who would do such a thing? And why? The answers are almost as terrifying as the violence itself. “The most terrifying thing is just how normal he seems,” a neighbour of Bowers told the Associated Press.

Indeed, often “ordinary people” commit these evil deeds. To grasp how extraordinary evils are often committed by apparently ordinary people, we need to take care regarding how we define evil, and most importantly, whom we consider to be the agents of evil.

Earlier today, I wrote to the Peretz Centre for Secular Jewish Culture (Vancouver's community for Secular Humanistic Judaism) to extend my deepest sympathies and condolences following this weekend's attack on the Jewish community in Pittsburgh and by extension Jewish peoples around the world. These are undoubtedly trying times and the resurgence of openly violent antisemitism is deeply concerning.

Donna Becker, Executive Director of the Peretz Centre wrote back to me with a message for BCHA members:

The kind of action we saw in Pittsburgh and in other places in the US and even in eastern Canada is unbelievably terrible. The Pittsburgh murders raise antisemitic attacks to a new level—orders of magnitude beyond desecrating a graveyard or vandalizing a synagogue.

We at the Peretz Centre have sent condolence letters to various mosques, churches and synagogues in the recent past, and It is so good to know that the BC Humanists stand behind the Jewish community, as we stand behind other victims of ignorance and bigotry.

We mourn those killed in the anti-Semitic attack at the Tree of Life #PittsburghSynagogue & recognize the tragic impact on the community. We also recognize this as an example of a white man radicalized by a regime bent on using divisive hate-filled rhetoric to bolster its base. pic.twitter.com/HfGhk0juVL

This was not an isolated incident. Earlier last week, it was widely reported that another far right extremist sent pipe bombs to numerous Democratic officials and a white supremacist murdered two innocent people at a drugstore. The resurgence of violent antisemitism and white supremacy occurs amidst a clear campaign by far right groups to use racial resentment to divide and radicalize people.

Humanists and atheists are not immune from contributing to this toxic climate. I've seen atheists bring up the antisemitic conspiracy theory of cultural marxism. Even more blatantly, I've seen atheists claim "the religion of Judaism is worse than Nazism" in an ugly effort to try to make some cheap point about how much they dislike religion. It doesn't take long to hear similar comments about Muslims or Islam in many atheist spaces these days either. Regardless of efforts to caveat that the point of that such statements are about challenging ideas and not people, given the broader discourse we have a duty to think far more critically about the arguments we are making, or letting go unchallenged. Because it is neither reasonable nor productive to make comparisons between a religion that's practiced by around 15 million people and an ideology that is dedicated to the eradication of all of those people.

Humanist values should compel each and every one of us to condemn all forms of bigotry and motivate us to fight discrimination and intolerance in our communities. We need to take responsibility not just for our own comments but for our own silence in the face of others' hatred.

Finally, we must stay committed to our common humanity. Humanism calls on us to utilize free inquiry for the furtherance of peace and in the service of compassion. So let us aim to be thoughtful and compassionate as we continue to work for a better world.

The hypocrisy of Québec’s move to ban religious dress

By Richard Moon, University of Windsor

The newly elected government of Québec has indicated that it intends to ban civil servants in positions of authority (including police officers and judges) from wearing religious dress or symbols such as the turban or hijab.

The new government views the wearing of religious dress by civil servants not as an act of personal religious or cultural expression but instead as a political act — an act of the state — that is incompatible with the requirement that the state remain neutral in matters of religion.

The ban will have the effect of excluding the members of certain religious minorities from civil service jobs. And it will, almost certainly, breach religious freedom under the Charter of Rights and Freedoms.

At the same time, the government has confirmed that a crucifix will continue to hang in the provincial legislature. The government insists that the crucifix is simply a “heritage object” and “part of our history” and so its presence in the legislature doesn’t violate the requirement that the state remain neutral in matters of religion.

The (partial) end of the War on Drugs

Today is the first day that recreational cannabis is legal to buy and use across Canada.

Here in BC, that means you can buy it from the one open store in Kamloops (pictured above, via bcgovphotos) or via the government's online store.

Thanks to Eugene, Sonia, Wanda, Clayton, Greg, Katie and Aron who came out on Saturday night to support the BC Humanists in the annual Light the Night walk. 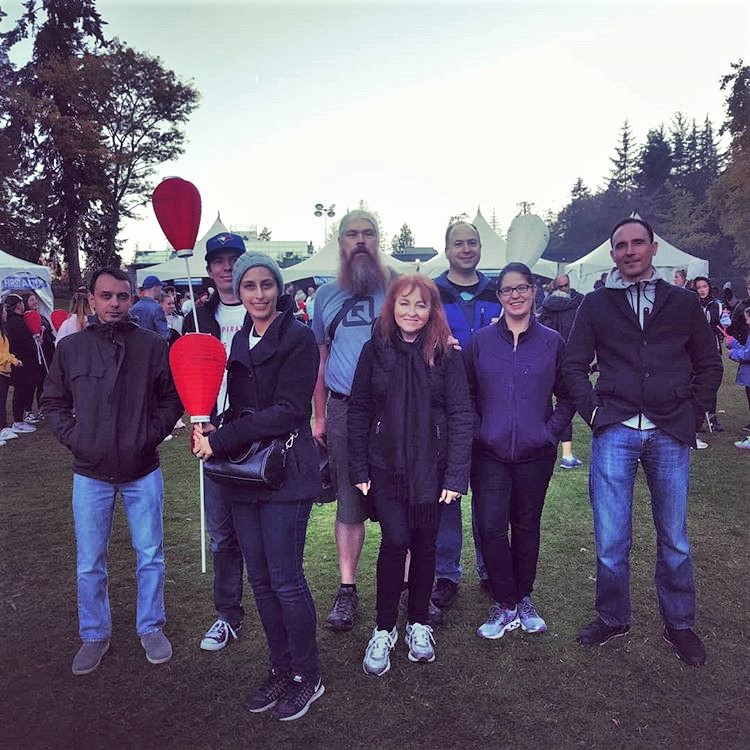 Our Light the Night team

This event builds on our efforts to promote Humanist Action - living Humanist values in an effort to make the world a better place.

We're hoping to get our members and supporters involved in more charitable activities in the future.

Let me know what other ideas you have or if you live outside Metro Vancouver, we'd be eager to help you start getting involved in your community.

If you were to watch a split-screen broadcast with global weather on one side and world politics on the other, you could easily conclude that we are doomed.

Prodigious storms and killer heat waves announce the arrival of human-induced climate change, with more disasters to come as the planet warms and ecosystems collapse.

But right-wing populism is rising faster than the oceans, sinking efforts to combat this and other global crises. Meanwhile, U.S. President Donald Trump keeps tweeting that climate change is fake news. Very bad!

And yet we humans have also shown that we can overcome even our most daunting problems. Exhibit A is our victory over smallpox, perhaps the most feared pathogen of all time.

Estimating the scale of the elite private school giveaway

Every year the BC government provides hundreds of millions of dollars in public funding to private schools, including elite prep schools. Given that BC’s public education system has been severely underfunded for most of the past two decades—and is still failing to adequately support students with special needs—this use of public resources is hard to fathom. BC should eliminate the flow of taxpayer dollars to elite private schools, and redirect the funding to support special needs students.

A group of 200 pastors lined up to denounce the province's sexual orientation and gender identity curriculum (SOGI 123).

The curriculum was developed under the previous provincial government and continues to be supported by the current government, the teachers' union, principals' associations, independent and First Nations schools associations.

We've just published examples of independent schools in BC that are teaching creationism in science classrooms. These are schools that together receive tens of millions of dollars from the provincial government.

But right now we have an opportunity to push back on this funding.

The BC Legislature's Finance Committee is currently holding public hearings across the province on the 2019 budget. Anyone is welcome to sign up for one of these hearings and speak for five minutes.

A number of these meetings are already full but if you live in Cranbrook, Trail, Nelson, Kamloops or Kelowna, you can sign up to speak this week.

Let us know if you will be speaking and we'll help you prepare some speaking notes.

Otherwise, you can make a written, audio or video submission and you can complete the committee's survey online. This is a great chance to encourage the committee to put nearly half a billion dollars back in the public education system.

We'll be releasing our own submission to the committee soon.