Douglas Todd reports in this weekend's Province about a new Mainstreet Research poll about the religious makeup of each party's support in the lead up to the BC election.

While there is some interesting data in that poll, another poll that he reports on suggests support for school prayers and the National Post suggests data from the Angus Reid Institute proves Canadians are still religious.

Both of these could be taken apart in detail (and we criticized the National Post on Facebook) but in short, the supposed support for school prayer conflates the freedom every student has to pray with the coercive practices as happened in the past, and the data in the Angus Reid poll directly contradicts the narrative the National Post tries to spin.

By treating religion with kids gloves, it's of little surprise that on Friday, Christy Clark tweeted: 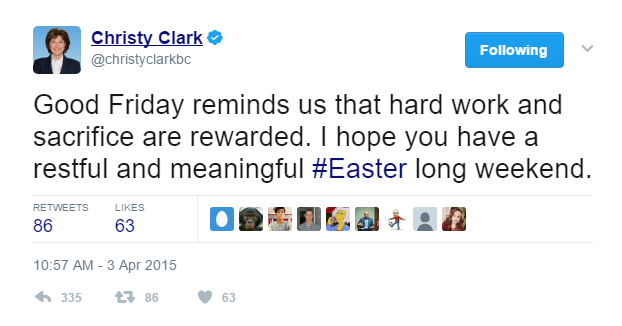 Following that, people were quick to question whether Clark took the right lessons from the story of Jesus' crucifixion.

We've also previously criticized the Premier for excluding the majority of British Columbians that don't identify as Christian by pandering to evangelical Christians.

Nevertheless, the BC Humanist Association is a non-partisan association, and we're not lobbying on any issues during the election period. My point today is just that politicians and the media will fail to grow their constituencies or audiences without recognizing the growing non-religious demographic in this province.

Let us know if you're interested in standing for the board. We'll also be voting on a new constitution and bylaws.

You must be a member to vote at the AGM - check or renew your membership now.

Prof Lawrence Krauss is an internationally-known theoretical physicist with wide research interests, including the interface between elementary particle physics and cosmology, where his studies include the early universe, the nature of dark matter, general relativity and neutrino astrophysics. He has investigated questions ranging from the nature of exploding stars to issues of the origin of all mass in the universe.