Blasphemy is still a crime in Canada

You could face two years in prison for "blasphemous libel" under section 296 of the Criminal Code of Canada.

While this law hasn't been used in decades, theocratic and authoritarian regimes are able to point to it to justify their own modern blasphemy laws.

In 2017, the government introduced a bill to repeal section 296 but it has yet to pass through the Senate. 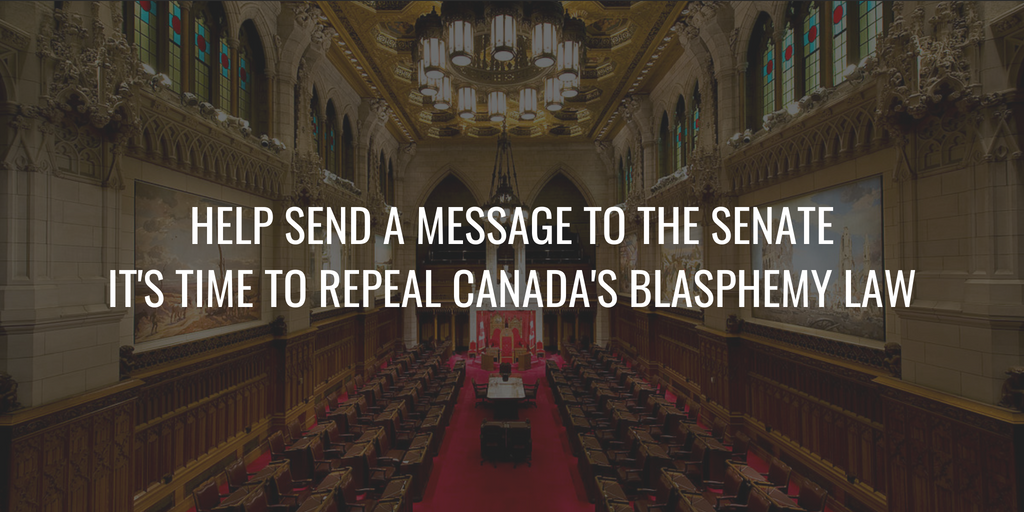 Bill C-51 would have also repealed another law that singles out "clergymen" for special protections. However, churches across Canada lobbied aggressively against this change and forced the House of Commons to amend the bill.

To the Standing Senate Committee on Legal and Constitutional Affairs:

Blasphemy laws chill the free expression of atheists and religious minorities. However, maintaining the special protections for religious officiants and worship means religious dissidents will continue to risk prosecution if they speak against religious authority. In studying Bill C-51, we urge the Standing Senate Committee on Legal and Constitutional Affairs to support the repeal of sections 296 and 176 of the Criminal Code.

Canada remains one of the last liberal democracies to maintain a blasphemy law in section 296. Even though no one has been prosecuted under the law in decades, the presence of such a law can bolster the arguments of regimes around the world seeking to introduce new blasphemy laws to censor atheists and religious minorities. It's well past time we repeal this antiquated attack on free speech.

Section 176, which prohibits obstructing clergymen or disturbing a religious worship, acts as Canada's other blasphemy law. The law criminalizes religious dissent and gives protections to religious authorities that are not afforded to the nonreligious. We are disappointed that the House of Commons chose to keep this section and urge you to reconsider that decision.

Please defend the right to speak against dogmatic authority: Support the repeal of sections 176 and 296 of the Criminal Code.