The other weekend, my wife and I cantered the 400-odd kilometres from Lethbridge to Calgary and back to attend a forum organized by St Andrew’s Church on the subject of physician-assisted dying. A learned panel of speakers had been assembled consisting of two physicians, one of whom was also an Alberta MLA, two lawyers, a priest and an Edmonton chapter member of Dying With Dignity Canada. The whole affair was moderated by an emeritus professor, who suffered from moderately severe logorrhea.

The proceedings were opened and the audience welcomed by the charming female minister in charge of St Andrew’s. The order of play and the rules of conduct were explained at great length by the moderator. The first speaker was one of the lawyers who gave a cogent explanation of the genesis of the Canadian constitution and outlined those matters which fall entirely under federal jurisdiction and those which are the responsibility of the provinces. She pointed out that the new law concerning physician-aided dying fell somewhere between the two. She was followed by an overlong but passionate theological dissertation from the minister on the panel concerning the new law. She claimed, among many other things, that Jesus of Nazareth was God incarnate who had suffered grievously on the cross. She implied that if God could suffer unendurable grief and pain then his creation, namely humanity, could do the same. Consequently, the use of human-devised law to escape possible end-of-life suffering was quite unacceptable, nay, even blasphemous. So vehemently did she make her points that she was weeping openly by the time she sat down. Apparently, it did not occur to her that her words made no sense to many in the audience who have no truck with concepts such as God.

The representative from Dying With Dignity Canada gave by far the best talk. He was brief, cogent, to the point and unemotional. I suspect that he was the only member of the panel not suffused with religious ideology.

It was then the turn of the two physicians. The first was a specialist in palliative care who made the point that such care was not sufficiently available across the country and that much had to be done to remedy this. No sensible person would argue with him on that matter. He then went on to speak about the journey that the dying person faces and how persons with his training could help them. He admitted that he was not prepared to be part of physician-assisted dying. The other doctor, an MLA, revealed that the Alberta government had not yet started to consider how the new law might affect the people of that province. He suggested that it was highly likely that it would get to work fairly soon.

Most of the speakers were very eager to ensure that health professionals who were reluctant to take part in the exercise of shortening the lives of the grievously ill, should be protected. They were also keen to ensure that faith based institutions, such as hospices and nursing homes should be given the right to refuse to allow the practice on their premises. They acknowledged that these objections might very well cause awkward dilemmas to occur, especially where no suitable alternatives were easily available. One speaker felt that the term “conscientious objector” was demeaning. He preferred ‘”objectors by reasons of moral conscience.” This is a fine point but probably carries some validity. 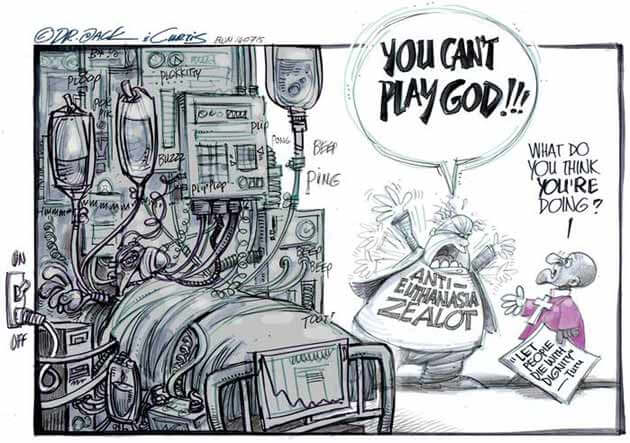 Then followed questions, of which there were several. I do not recall any member of the audience revealing that they were against the Supreme Court's decisions, which specifies that those who are suffering from a grievous and irremediable condition which led to unendurable sufferin and who were adult and of sound mind could apply for physician-assisted dying. I asked whether they thought that the interim provisions in place with effect from February 6 requiring application to a superior court judge was likely to be a model for the permanent legislation expected by June 6. I pointed out that I hoped it would not be so for if it were it would turn physician-assisted dying into a criminal matter rather than one of health. I did not receive a very crisp reply.

Times, they are a-changin'

There was one rather poignant moment involving the last questioner, an elderly woman, who asked what was the purpose of her church any longer. After all, it now sanctioned gay marriage, it no longer railed against therapeutic abortion, it ordained women and now seemed likely to support the deliberate shortening of life for suitably qualified individuals by their physicians. She revealed that she had been a devout Christian for all of her adult life and had watched as pillars of doctrine been slowly dismantled. I found the tone of her question, and the way in which she asked it, rather moving. I was reminded by the anecdote of the elderly Jewish man who had visited the Wailing Wall in Jerusalem three times a day to pray. He was asked what he prayed for. He replied that he prayed for peace, understanding between different peoples, for the state of Israel, and for the good of humanity. When it was pointed out to him that his prayers looked to have been unavailing and then  asked how he felt about that, he replied that he might just as well have been talking to a blankety-blank brick wall for the past 40 years!

Both my wife and I enjoyed our trip for the most part. We found the theological experience a little hard to take.

Dr David Amies is a retired doctor in Lethbridge, AB, and a member of DWD Canada's Physicians Advisory Council.

This article was originally published on Dying With Dignity Canada's blog and has been republished with permission. Read the original article.