In Open Defiance: Unconstitutional prayers at municipal councils in Manitoba

Municipalities with prayers in their council meetings

Members of the BCHA research team wrote to every municipality that was found to have included prayer in their inaugural or regular meetings, specifically asking that future meetings be made compliant with Saguenay.

The Rural Municipality of Rhineland replied that councillors were no longer required to provide a prayer but "“sometimes councillors read Devotions/Short Stories/Prayers or fables (Any domination or faith) as part of the opening or sometimes comment of recent events or news in our region. Other councillors use the opening to recognize outstanding achievement of community members/organizations or sporting teams.”

The Rural Municipality of West St Paul agreed and replaced its invocation with "opening remarks" from the mayor in mid-February 2021.

The City of Winnipeg initially ignored our inquiry. After we requested a legal review that had been completed under the province's freedom of information law, the City eventually provided us with a completely redacted document. 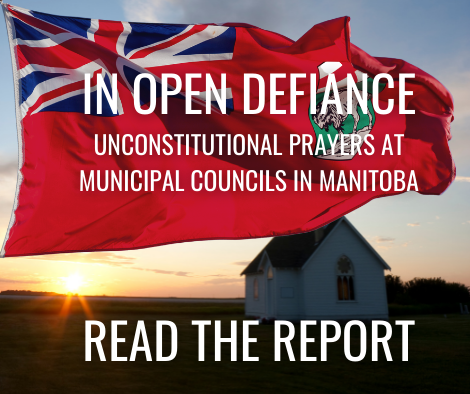 This is the second in a series of reports that explore the compliance of municipalities with the Saguenay decision. The BC Humanist Association research team is compiling reports on compliance with Saguenay for Canadian provinces and territories. Each will follow a similar model and method but will explore issues specific to the practice in those jurisdictions. The first report found that 23 municipalities in British Columbia opened their 2018 inaugural meetings with prayers. All these prayers were delivered by members of Christian clergy, 73.9% of whom were men. No regular council meetings were found to open with prayer in this province. In compiling these reports, we aim to encourage municipalities into compliance with Saguenay, making their council meetings more accessible and welcoming to people of all beliefs.

Read the first report in the series, The Duty of Neutrality Beyond Saguenay: Unconstitutional prayers at municipal councils in British Columbia.