In defence of dignity and bodily autonomy

In defence of dignity and bodily autonomy

Progressives are still reeling at yesterday's report from POLITICO about a leaked draft majority decision from the Supreme Court of the United States. That decision, from conservative Justice Samuel Alito, would overturn Roe v Wade and lead to the near instant criminalization of abortion in as many as half of the states. The draft has been thoroughly condemned by many groups, including our Humanist allies at Americans United, American Humanist Association and Center for Inquiry.

Canada's legal restrictions on abortion were struck down in 1988 following the fights by activists and former Humanist Canada president Dr Henry Morgentaler. Nevertheless, the potential American ruling is rippling through Canada, raising the spectre that abortion rights could one day be under similar threat here.

As Dr Morgentaler's fight demonstrates, Humanists in Canada have long been at the forefront of the fight for reproductive justice in Canada. This is centred in the Humanist commitment to personal dignity and the right to bodily autonomy.

As many have argued so eloquently, it's not the place of the church or the state to tell someone what they can or cannot do with their own body. 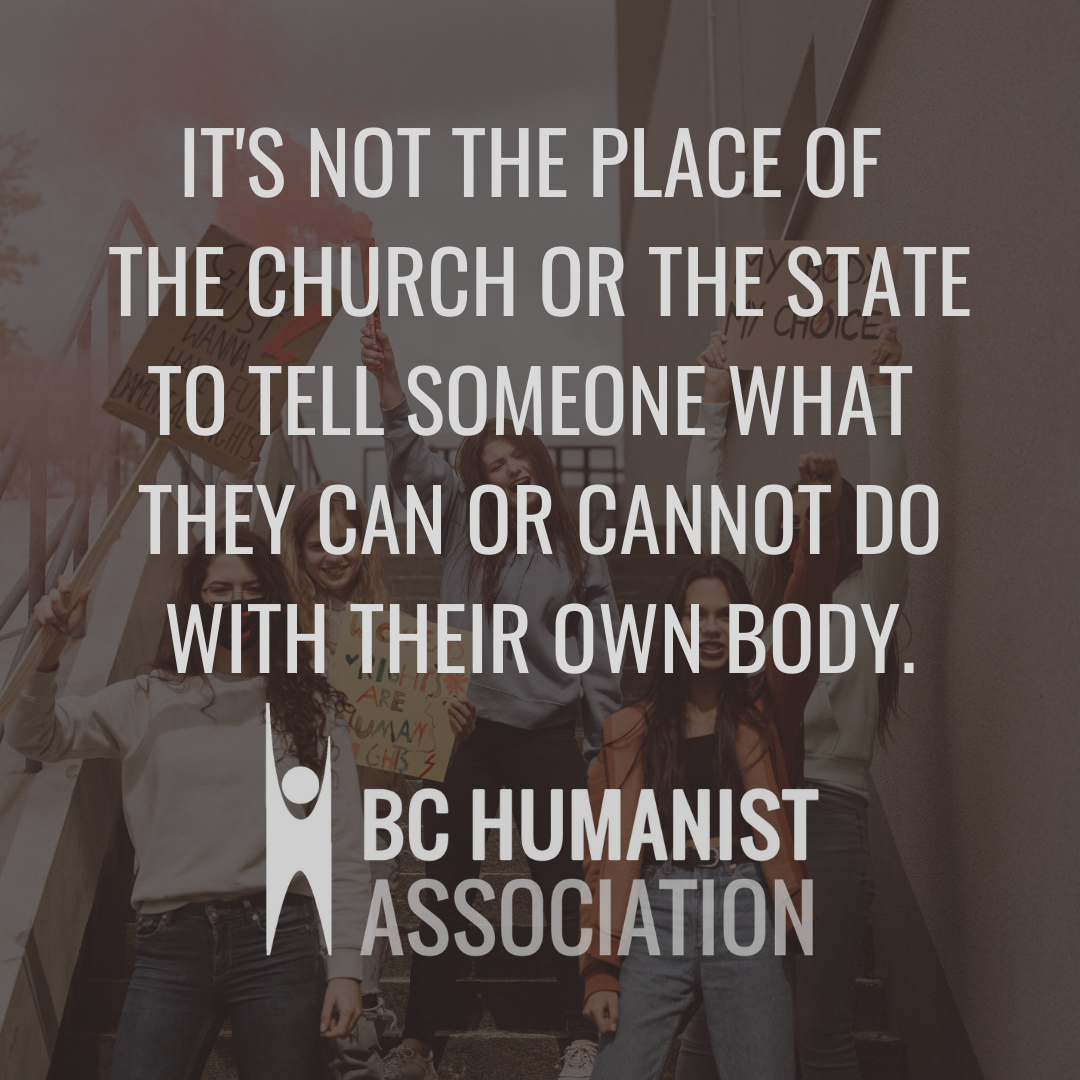 Yet the fight for reproductive justice is not over in Canada. Not only must we be ever vigilant against those who would turn back these hard-fought victories but we must also push to ensure everyone in this country has the ability to access an abortion.

Others have pointed out that access remains a challenge for many people across Canada. Provincial regulations vary widely, disparities in funding mean rural areas are often left without access and we don't yet have universal prescription contraceptives.

There are also subtler ways anti-choice activists seek to undermine our rights.

The BCHA research team has been working with our friends at the Abortion Rights Coalition of Canada on a project investigating so-called 'crisis pregnancy centres' both here in British Columbia and across Canada. These clinics often pose as neutral sources of information or services for pregnant people but then actively dissuade them from choosing abortions.

We need your support to finish this critical investigation.

The right to contraceptives and access to abortion isn't the only way that bodily autonomy is under threat in Canada. Many of the same religious fundamentalists that are tearing apart the right to abortion in the USA are lined up against medical assistance in dying (MAID) in Canada.

And unsurprisingly, we see many of the same arguments employed against MAID as we've seen employed against abortion: claims that abortion leads to eugenics, that enacting needed supports eliminates the need for abortions and other slippery slope arguments.

Our work supporting medical assistance in dying (MAID) is fuelled by the same Humanist commitment to protecting individual's dignity and choice.

Right now a special Parliamentary committee is reviewing Canada's MAID laws. They need to hear from you by Monday.

Other arguments against MAID expansion have come up as well, in particular noting that successive governments have broken countless promises to Canadians with disabilities. Most recently is the promised Canada Disability Benefit. Inflation, increasing cost of living and the challenges finding affordable housing all compound an already too-often dire situation for many people with disabilities, who are more likely to live in poverty.

The BCHA endorsed the call to enact this benefit in its submissions to the Special Joint Committee, noting however that:

Continued or increased restrictions to accessing MAID do not serve to protect the disabled but rather perpetuate a paternalistic relationship between the government and those individuals. To ensure the equal dignity of all people, we must afford everyone choice in life and choice in death.

And just like abortion, access to MAID is supported by an overwhelming majority of Canadians, with no clear difference in opinion between those who say they have a disability and those who don't.

Canada's assisted dying laws, while somewhat unique in the world, are not unprecedented. Jurisdictions including the Netherlands, Belgium and Oregon have permitted differing forms of assisted deaths for longer than Canada. Reviews of studies of those jurisdictions were considered in the Carter v Canada case, as well as the Quebec Supreme Court's Truchon decision.

The evidence does not support the conclusion that, since the legalization of physician-assisted death, there has been a disproportionate impact, in either Oregon or the Netherlands, on socially vulnerable groups such as the elderly or persons with disabilities. [Justice Smith, Carter v. Canada (Attorney General) 2012 BCSC 886 at para 1241-2]

In their 2021 article for the BMJ, Dalhousie law professor Jocelyn Downie and Queen's philosophy professor Udo Shuklenk build on those arguments to firmly reject the slippery slope arguments presented in opposition to the expansion of MAID in Canada.

In every aspect of our work, the BC Humanists will continue to advocate for a continued expansion of rights and justice. This includes the supports necessary to live a life and raise a family with dignity and it includes the bodily autonomy to control one's reproduction and death.