Last week we launched a petition calling on BC’s new Minister of Health to allow Humanists to perform marriages. Since then we’ve spoken with SpiceFM, CBC, Early Edition and CKNW and had nearly 500 people sign the petition.

In those conversations, and over social media, we’ve fielded a number of questions about our petition. While our report The Case for Humanist Marriage in BC answers many of those concerns, it’s worth doing a quick response to the most frequently asked questions.

What is a Humanist?

Perhaps one of the biggest points we want to get across in all of our work is just what Humanism is. At it’s simplest, we’ve described Humanism as the idea that you can be good without god but it’s really much more than that.

Humanism is a worldview built around the promotion of human dignity. That value is clear in each of the declarations adopted by Humanist organizations since 1933 and in the writings of ethical culture and early modern humanists in the 19th century. What’s also clear is that Humanists reject the idea of a supernatural realm. Our values are human-centric, as opposed to relying on revelation or a god.

So Humanists don't believe in god(s) but we do believe in people. We support secularism - the separation of church and state - but we also stand for progressive values. We promote human liberty and social responsibility. Humanism is about challenging injustice and working toward a better world.

What is a Humanist marriage?

A Humanist marriage thus, is a celebration of the commitment two people chose to make to one another, with a particular focus on the couple. There’s no prayer or appeal to the divine to bless the bond. It’s simply a ceremony that promotes the dignity of the individuals involved (which might include friends and extended family).

Humanists also have no dogma so there’s no one set script for what a Humanist ceremony might look like. For some, it might be a quick exchange of vows, while others might want to incorporate a number of rituals that have meaning to them.

Here's a write-up of what Humanists marriages look like in the UK.

The other option, and one we are able to provide at the moment, is to have a marriage commissioner sign off the legal bit of a ceremony while the rest is performed in an explicitly-Humanist manner. However, having a marriage commissioner sit in the corner to observe the ceremony is a fundamentally unjust and patronizing system. We do not require government representatives to observe ceremonies performed by Catholics, Muslims or even Scientologists. We are simply asking for equal treatment.

Rather than ask, or suggest has the government has, that Humanists apply for government positions, we’re asking why we’re not afforded the same privileges as religious groups as diverse as Catholics and Buddhists. Groups recognized by the government are able to appoint their own marriage officiants, and we’re simply asking for the same rights. The Supreme Court of Canada has been explicitly clear that our laws should not discriminate on the basis of belief or non-belief. 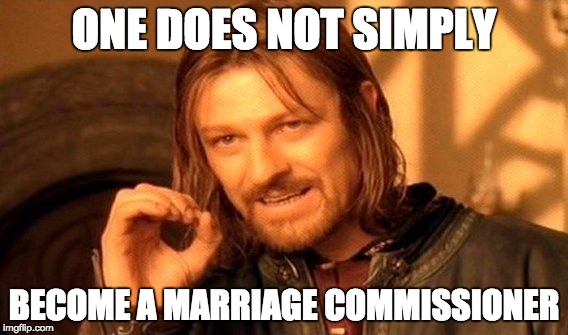 Nevertheless, even if we accepted the argument, the marriage commissioner system is not simply open to everyone. You have to be retired, there are a finite number of positions, they cannot advertise, must live in the community they serve and must use specific language in their ceremonies. They are also required to report all their revenue to the government. They are for all intents and purposes, government contractors and religious representatives have no similar restrictions. The Catholic Church can appoint as many clergy as it wants while Humanists are stuck going through a restrictive channel.

What about other paths to becoming a wedding officiant in BC?

If you search on Google for celebrants or wedding officiants in BC, you’ll find no shortage of individuals and groups that offer to perform and solemnize weddings. One group even offers a path to become a wedding officiant in BC.

This all just further underlines the hypocrisy of the current system however.

The All Seasons group, while not describing itself as a religion, does suggest “it would be good if you are ‘spiritual’ in outlook” if you want to become one of their officiants or clergy. This means they are one of the organizations registered by Vital Statistics to perform weddings.

But beyond these few clues on their website, they bear no resemblance to what one might traditionally think of as a religion. The same goes for the numerous officiants and celebrants who market themselves in secular and commercial language.

Finally, Health Minister Adrian Dix told CBC in his initial comments on the issue that while he'd be open to the idea, the legislative process if very slow. This is a point we fully accept, particularly in a tenuous minority legislature where BC could be headed back to the polls in matter of months.

But this is exactly why we’re focusing this petition on what can be done now. The Marriage Act doesn’t define religion. Instead it's therefore up to cabinet and the bureaucracy to develop a definition and a test. Right now there’s a policy in place to guide Vital Statistics in making these decisions, but that policy can be changed by the government without passing a new law. It can simply be updated in a way to expressly recognize Humanism as a religion for the purposes of the Act. This would put BC in line with Ontario, where Humanists have been performing marriages as a "religious organization" for over a decade.

In the longer term, we’d love to see a legislative change to mirror the system in Scotland or other jurisdictions where Humanists can perform marriages. But for now the government has all the tools it needs to make this possible.

Our 2016 poll found that 65% of British Columbians support the government allowing non-religious groups to appoint individuals to perform marriages. This is an uncontroversial request that reflects the increasing diversity of the province.