The BC Humanist Association today wrote in support of the SOGI 123 resources being adopted by the Langley School Board.

SOGI stands for sexual orientation and gender identity and was created for BC teachers in partnership with the Ministry of Education, the BC Teachers Federation, nine school districts and Out in Schools. It aims to promote LGBTQ-inclusive education.

Religious conservatives and activists who view the curriculum materials as part of a "political cult" have been holding rallies and targeting Langley School District specifically, despite the program being in place in districts across the province and having received support from all levels of government and across the political spectrum.

A rally in support of SOGI 123 is being organized for September 26 by Langley Parents for Inclusivity.

In its letter, the BCHA references the 2002 Chamberlain v Surrey School District ruling at the Supreme Court of Canada, where religious groups pressured the district into banning pro-LGBTQ material. The court ultimately ruled this violated the School Act's requirement that BC public schools be "strictly secular and non-sectarian." In that ruling, the Court said schools "must act in a way that promotes respect and tolerance for all the diverse groups that it represents and serves."

Despite a clear Supreme Court of Canada ruling, the legalization of same-sex marriage and the extension of human rights protections to trans individuals by every province and the federal government, there are still people who want to use their religion to continue the marginalization of LGBTQ students in our schools.

With this letter and by promoting this rally, we want to show that Humanists stand in solidarity with the Langley School District - and all other districts in BC - that are promoting inclusion and human rights.

See the poster below for more information. 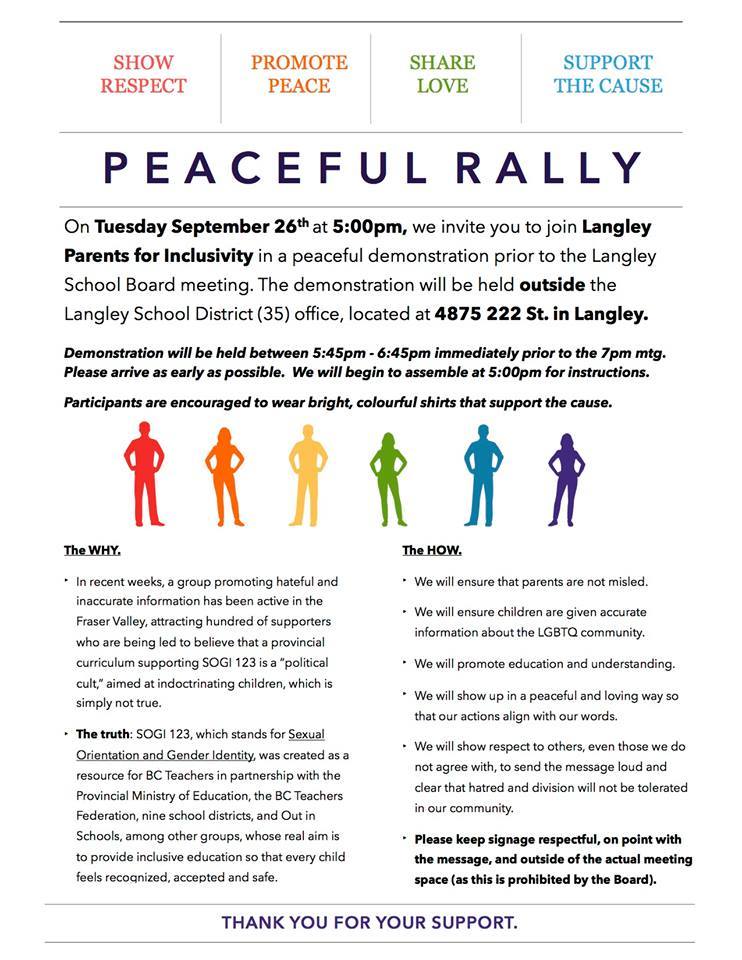 Join the Secular Schools campaign or make a donation.