Almost no one in BC goes to church

Almost no one in BC goes to church

A new poll from ResearchCo has found that only 3% of British Columbians say they attend religious services "at least once a week." Only 2% said they had "confessed or sought advice from a religious figure" in the past 12 months.

The poll also found that 29% of people in the province are either "convinced" or "tend to believe" that God does not exist.

ResearchCo was formed by Mario Canseco, who the BC Humanist Association worked with on the 2016 Religious and Secular Attitudes Survey when he was with Insights West. In that survey, 11% of British Columbians said they attended religious services weekly, while 15% said they attended at least weekly in the BCHA's 2013 poll. 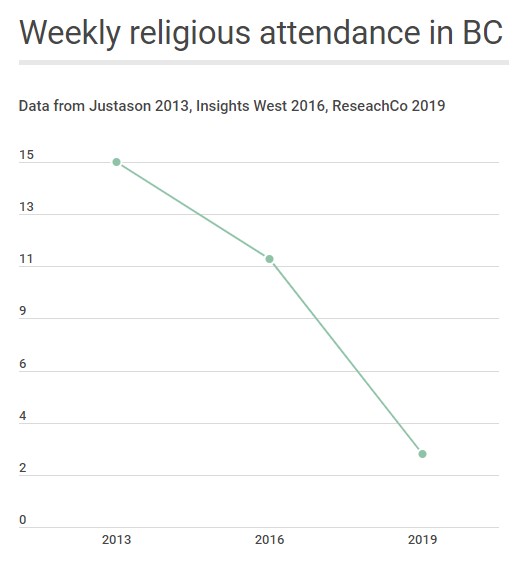 These new numbers show that pews across BC are emptying, yet municipalities continue to grant thousands of dollars of property tax exemptions to churches and religious properties and the government continues to pour hundreds of millions into faith schools. It's time to stop the handout and see religious groups pay their fair share.

The BC Humanist Association has been profiling the cost of exemptions given to religious properties by BC towns and cities as part of its Fair Property Tax Exemptions campaign. The BCHA has also been calling for public funds to be kept for public education.