A campaign claiming to speak for "the most vulnerable" has spent tens of thousands of dollars on Facebook ads in the past three months and is being funded by a group of anti-choice healthcare professionals, according to a new analysis by the BC Humanist Association.

In a November press release on the Catholic Archdiocese of Toronto's website, the Christian Medical and Dental Association (CMDA) announced the launch of the "No Options, No Choice" campaign to oppose planned expansions to Canada's medical assistance in dying (MAID) laws. The footer of the campaign page includes the CMDA's logo as well as that of the Canadian Hospice Palliative Care Association.

The CMDA's seeming primary focus is on so-called "conscience protection" or the ability for medical professionals to refuse to provide care when it violates their claimed religious beliefs. These refusals are almost exclusively limited to providing MAID or reproductive healthcare, including prescribing contraceptives or providing abortions.

In 2019, the Ontario Court of Appeal ruled against the CMDA, finding that healthcare workers with conscientious objections had a duty to provide an effective referral.

The Meta Ad Library displays the amount spent on ads pertaining to social issues, elections or politics on Facebook and Instagram. Using the library, the BCHA found that the CMDA, through the No Options, No Choice campaign, has spent over $35,000 between October 19, 2022 and January 16, 2023. 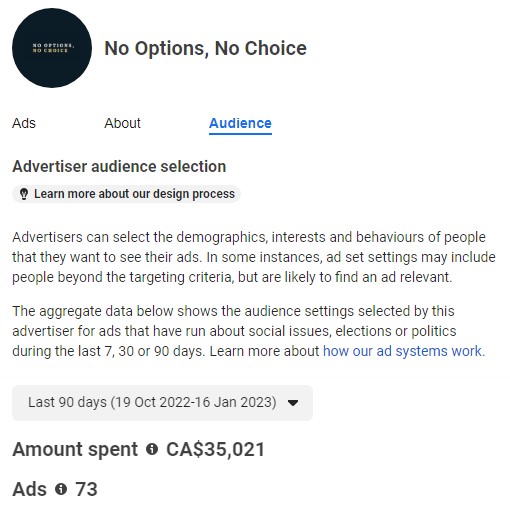 Over $6000 was spent in the seven days between January 13 and 19 alone, making it the tenth largest spender on political ads in Canada. 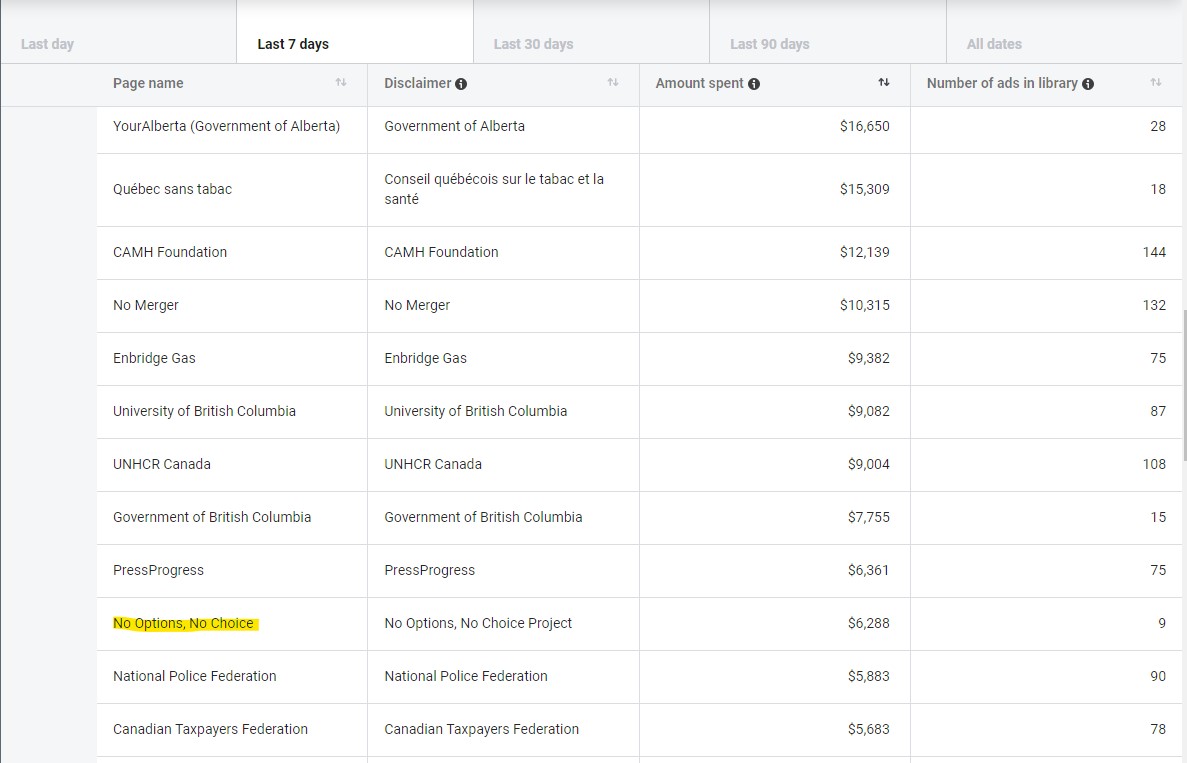 The page has around 3600 likes on Facebook; however, it was originally created in February 2016 under the name "Coalition for Healthcare and Conscience." On October 30, 2022, it was renamed "No Options, No Choice." 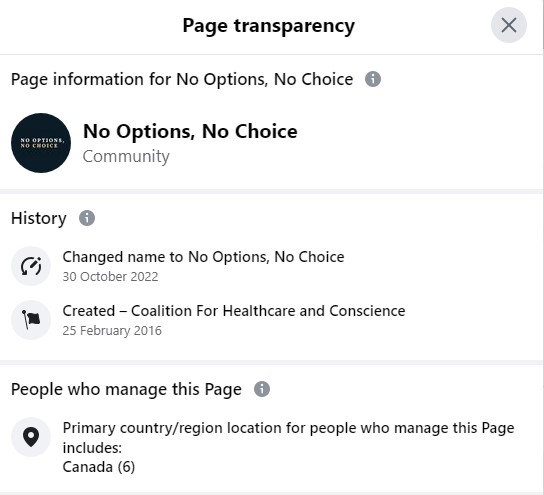 Facebook requires advertisers include a disclaimer for social issues ads identifying who paid for the ad. However, by using a unique and secular-sounding campaign page, the CMDA is able to hide its religious connection.

Examples of ads run by No Options, No Choice.

The calls to action that No Options, No Choice present sound laudable but they lack meaningful specifics. There's no mention of things like the Canada Disability Benefit or a Canada Mental Health Transfer that people living with disabilities and mental illnesses have called for. Instead it's vague platitudes about "increasing support" and "expanding services."

In this way, astroturf campaigns like this are effectively weaponizing the voices of disabled people to further an anti-choice agenda. In reality, an overwhelming majority of people with disabilities support MAID. According to a 2022 Ipsos poll conducted by Dying With Dignity Canada, 86% of people with a disability supported the Carter v Canada decision and 83% supported removing the 'reasonably foreseeable' requirement for accessing MAID. Ensuring there are robust safeguards for MAID is vital but rolling back these hard won rights will not eliminate ableism in society. Instead, it needlessly forces some to continue living in irremediable suffering.

At very least, whenever you come across advertising or even media stories on contentious issues, it's critical to apply a skeptical lens.