Have an omelet and pray, with the Prime Minister

This morning, the Prime Minister, leader of opposition and an untold number of Members of Parliament gathered, over Zoom, to join in the annual National Prayer Breakfast. While the American version of the event is probably more familiar to most people, Canada has in fact had its own Prayer Breakfast for several decades.

We had Adriana Thom, our Policy Researcher, look into answering a few questions about the event.

What is the National Prayer Breakfast?

The National Prayer Breakfast is an annual ‘Christ Centred’ event where leaders in Canadian Politics are invited to gather to pray, listen to guest speakers, and share their faith – all while enjoying the most important meal of the day. The Breakfast has typically taken place on Parliament Hill in Ottawa; however, due to COVID-19, it was held virtually in 2020 and 2021.

How did the National Prayer Breakfast start?

The first National Prayer Breakfast was held in June of 1964 and was initially an event put on by the ‘Parliamentary Prayer Breakfast Group,’ a group of Members of Parliament that would regularly meet in order to pray and discuss their faith. Despite assertions by organizers that the National Prayer Breakfast should be focused “solely on Jesus Christ” instead of furthering any personal, religious, or political agendas, they go on to claim that the event is “Christ-centered but it is not exclusively for Christians.” The organizers go on to explain that the breakfast “does not seek to convert people to Christianity. Rather, the aim is simply to meet in the spirit of Jesus and pray together. This means that we seek to love those around us just as Jesus loved those who were around him.”

Since then, the National Prayer Breakfast has continued and has been well attended, seeing participation by Members of Parliament, Prime Ministers, Party Leaders, and other leaders of faith. This year’s Breakfast included Prime Minister Justin Trudeau, Leader of the Opposition Erin O’Toole, and Pastor Steven Carleton, President of the Bill Prankard Evangelistic Association.

Who Organizes the “National Prayer Breakfast?”

The organization of the National Prayer Breakfast event has remained ambiguous since its inception. I was told by the Office of the Speaker of the Senate that it is currently held “under the auspices of the Speaker of the Senate and the Speaker of the House of Commons”; however, they seem to run the event in name only in order to promote the event as non-partisan in nature. The event is organized by an appointed “National Prayer Breakfast Chair,” who is a Member of Parliament. The current Chair, Cathay Wagantall (Conservative MP for Yorkton-Melville), and her office are officially responsible for organizing the Breakfast. Wagantall is most notable for introducing Bill C-233, which would restrict abortion rights under the guise of ending “sex-selective abortions.”

However, the Canadian Fellowship Foundation, an affiliate of the Fellowship Foundation that has been responsible for the prayer breakfast movement as a whole, is a federally chartered charitable foundation that has been registered since 1973. According to their 2019 Registered Charity Information Return, the Foundation’s ongoing programs include: “providing leadership for the holding of informal meetings across Canada and through this network, organizing prayer breakfasts on the federal, provincial and municipal level, all through a common belief in god.” Despite having a total revenue of $99,905, expenses of $77,417, and one full-time employee, little information is available on the Canadian Fellowship Foundations existence or ties to the event, apart from their annual filings. In his blog on the history of the National Prayer Breakfast, former Conservative MP for Cypress Hills-Grasslands, David Anderson writes that “The foundation serves no other purpose than to act as a vehicle to fund the activities of the Prayer Breakfast. Any additional assistance is provided on a volunteer basis.”.Anderson was also a founding member of the International Panel of Parliamentarians for Freedom of Religion and Belief.

What is odd about the National Prayer Breakfast?

Although the National Prayer Breakfast receives no government funding nor requires government officials to promote religion in an official capacity, there are a number of elements about it that just feel, well odd: 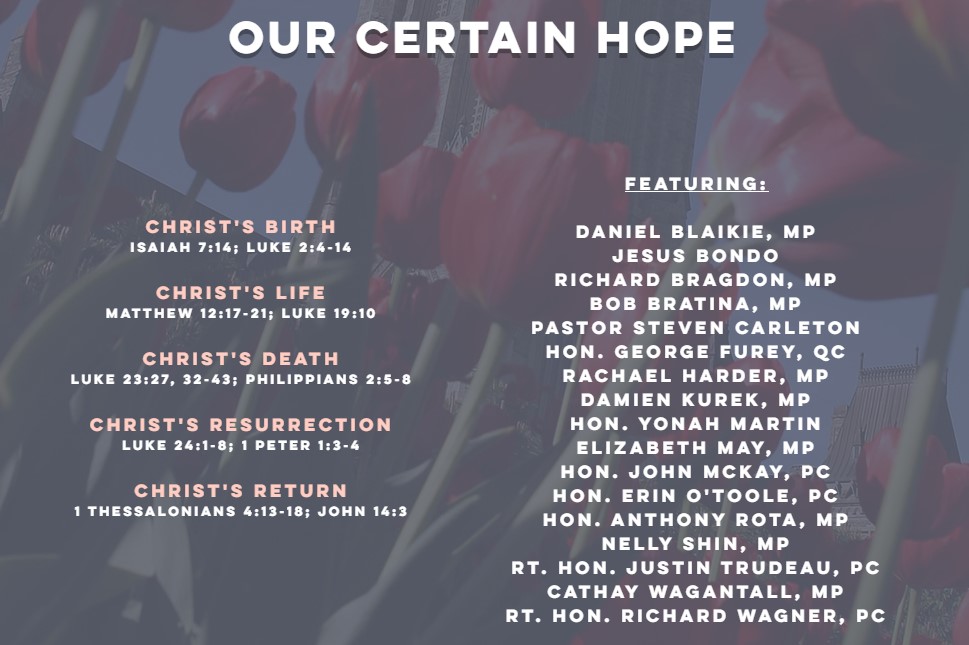