Can more religion in schools be a path to secularism?

Can more religion in schools be a path to secularism?

In a blog post and coverage in the Edmonton Journal, Edmonton Public School Board (EPSB) Chair Michael Janz is asking whether his schools should be able to open a Catholic Faith program.

I knew Janz when we were at the University of Alberta. Since being elected to the EPSB, he’s spoken out vociferously about ending public funding to private schools.

Alberta has an even more complicated and problematic relationship between religion and schools than BC. While both provinces give handouts to private faith schools, Alberta fully funds a separate Catholic system that competes for students in every district and allows public schools to operate Alternative Programs to “emphasize a particular language, culture, religion or subject matter.”

The government introduced Alternative Programs in 1988, and expanded them in 1994 and 2000. As of 2010, there were nine major programs offered by fourteen different school boards. These ranged from All-Girls to Hockey to Science to Christian programs (offered by three districts). This number seems to have expanded greatly since then and now a cursory glance at any public school district’s website will link to multiple faith-based Alternative Programs (Edmonton alone lists four partners, while Palliser lists seven).

Yet if the EPSB is able to offer Alternative Programs for Evangelical Christians, Janz argues that they should be able to offer Catholic programs too.

For a secularist, the argument makes a certain level of counter-intuitive sense. Luke Fevin, who’s long-advocated for the end of religious privilege in Alberta education, makes the case that this would bring some competition and possibly bring costs of Catholic education down in the long run.

The argument for maintaining a special & privileged Separate Catholic school system was always that the competition was healthy - that despite the additional cost, it was somehow good for our education system. Well, okay. Let's see what a little competition brings the other way.

He goes on to argue in favour of pluralism by ending the segregation of Catholic students in Alberta.

In the Alberta Catholic Schools Trustees Association’s response, they highlight that the School Act regulations expressly prohibits Alternative Programs that provide “religious education offered by a separate school board.”

This response gets to the heart of the hypocrisy of the situation. Alberta’s Catholic schools like to position themselves as a choice for parents. Yet this choice apparently only goes one way. Catholics get a privileged choice, while other students are left out.

Janz states that his motion "does not call for the abolition or defunding of the 17 Catholic School Boards in Alberta" but in my mind it offers a path to making a novel argument for it. By providing spaces for Catholic students within the public system, funds will move back to the public system as students change schools. If a public board can then provide better Catholic education than the separate school board, why maintain the duplication?

Catholic schools are protected by the constitution in many provinces, so this is a difficult nut to crack. Building off Janz's arguments presents an innovative approach to reframe the debate.

However, to me these arguments all miss the fundamental point that religion is best left in the hands of the religious. When the state gets involved in teaching religious orthodoxy, it inherently violates freedom of religion. While Catholics agree on a great many tenets of their faith, there is a diversity of opinion within the religion (and the same is true of every major religion). Putting the state in the driver’s seat – either by directly providing this education or by funding “approved” organizations to do it – is to dictate a certain lens through which children should be exposed to that faith.

That’s not to mention that these programs predominantly favour larger, well-established religious organizations and offer no similar equivalent to atheist and Humanist students. It also offers an opportunity for funding to go to religious groups with views that run counter to existing human rights legislation (particularly around LGBTQ equality, reproductive and end-of-life freedoms). While everyone is entitled to their beliefs about these issues, it makes little sense to directly fund education systems that counter Canadian law.

The simple fact is that Alberta needs to end religious Alternative Programs. While the picture Janz and Fevin paint is of Catholic students being welcomed within public schools, the reality of many Alternative Programs is that public school funding is sapped and directed to third parties, including offsite schools. Students taking part in the Edmonton Christian, Meadowlark Christian or Millwoods Christian Schools through the EPSB’s faith-based Alternative School program are literally being bused to private schools and those tax dollars follow them.

There is no equivalent program in British Columbia (or any other province that I’m aware of) and frankly such an expansion would set a worrying precedent. The continued growth of funding to independent schools in Alberta and BC alone shows how difficult it can be to roll back privileges won by the religious lobby. 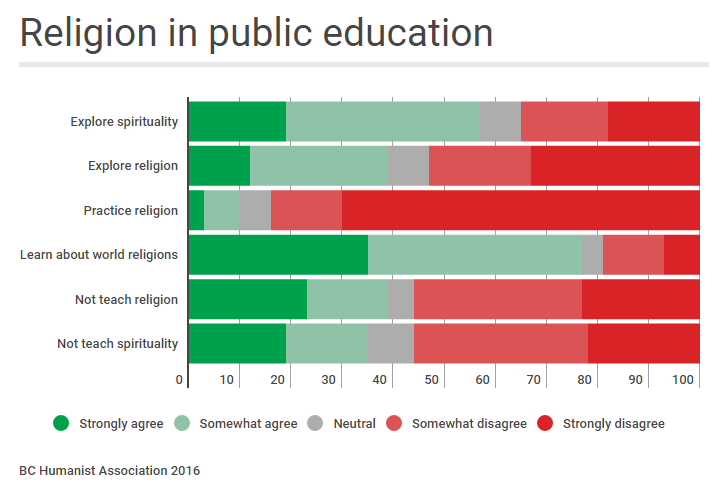 Finally, in our 2016 poll, we asked British Columbians about a number of approaches to faith and spirituality in public schools. These results were largely consistent with our 2013 poll. The strongest responses were that schools should not “encourage students to practice a specific religion or faith” (84%) and should “encourage students to learn about religions and faiths from around the world” (77%). Opinions are far more divided about the benefits of encouraging students to explore religion or spirituality and majorities disagree with avoiding the topics entirely. Perhaps the people of Alberta and BC have significantly different views on these questions but, having lived in both provinces, I think we have more in common than separates us.

The takeaway is that secular, comparative world religion and ethics classes are overwhelmingly popular. Similarly, the public overwhelmingly rejects indoctrination through the public education system. The way forward then for Alberta - and BC for that matter - is to stop funnelling public money to sectarian faith schools and programs and instead reinvest in a pluralistic public system for all.

Which means no more religious Alternative Programs, no more money for independent faith schools and no more funding for the Catholic school board.