This past year has been an unprecedented one on many levels. With the mass lockdowns, deaths, and other losses brought on by COVID-19, it has been an important time to stay true to our humanist values of morality, compassion, scientifically backed reason, and compassion.

In the face of these challenges, we at the BC Humanist Association have strived to continue empowering humanists and fighting for religious equality. To that end, our team completed numerous presentations and reports, launched new campaigns targeted at our member’s needs, and created a series of regular virtual events.

Since the start of the year, our little team has grown to welcome some new members!

The Canadian Summer Jobs Program allowed us to bring on three summer interns — two Research Assistants and one Marketing Coordinator. Thanks to the generous support of our members to the Summer Fund Drive, we were able to keep two of the new staff members on this fall, as our Policy Researcher and Director of Outreach. We also welcomed two new members to our team: our Research Coordinator, who had been a longtime volunteer, and a Campaigns Manager, who was brought on to create resources for our Medical Assistance in Dying campaign.

Early in the year, our Executive Director currently on leave, Ian Bushfield, was named Humanist of the Year by Canadian Atheist.

When he departed on parental leave this fall, the BCHA saw former Board Member Ranil Prasad step into the role of Acting Executive Director. 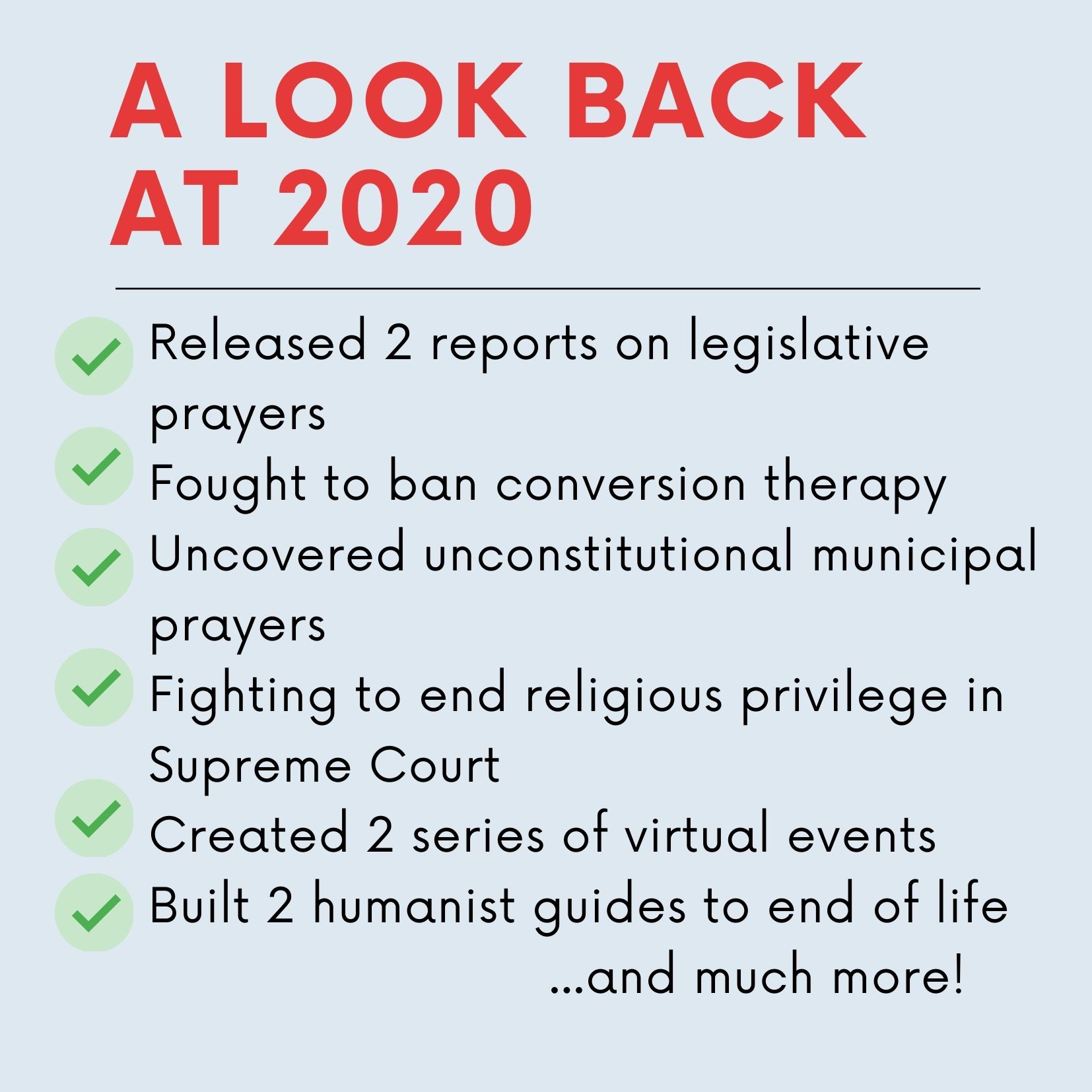 The BCHA strives to serve our community through the work we do in our research and campaigns. When the pandemic hit, it became imperative to create a new campaign on humanism during COVID-19 dedicated to connecting and informing our community in order to ensure a just, humanist recovery. There has never been a time when the humanist values of science and compassion have been more important, and this campaign aimed to further promote those values.

Over the last year, the BCHA has been a growing political force in British Columbia. Our team collaborated on a submission for BC’s budget, presented at the annual conference held by the Union of BC Municipalities, and released two groundbreaking reports on the state of legislative prayers across Canada, and at home in British Columbia.

The first of these reports, released in May, built off of the House of Prayers report in its work investigating the use of Indigenous content in daily legislative prayers. Titled Decolonizing Legislative Prayers, the report ultimately recommended the daily prayer be replaced with a territory acknowledgement. In August, Legislative Prayer Across Canada took a look at how all of Canada’s provinces and territories open their legislative sessions, and the degree to which religious neutrality is upheld in that.

Not wanting to leave municipalities out of this scrutiny, a report released this past month examined The Duty of Neutrality Beyond Saguenay, or how many of the municipalities across BC had stopped beginning their inaugural council meetings with prayer in the wake of the Saguenay ruling. An investigation revealed that 23 municipalities were in violation of the Supreme Court of Canada’s ruling. Since the report published, many of these municipalities have committed to or vowed to consider removing prayer from future meetings.

Apart from the work on religious neutrality, one of our larger campaigns focused on imploring the federal government to re-adopt a bill to ban conversion therapy following prorogation—which was successful. While the current bill is not perfect, we see it as a much needed first step.

Finally, we released a report in June titled Pass or Fail? that examined the academic success rates of UBC students, comparing those from private and public schools. Ultimately, it was determined through preliminary findings that there is no significant difference in the four-year retention rates or fourth year sessional average between the students.

In light of the pandemic, we felt it was important to keep providing events to engage and connect our community. This summer, we held our first virtual series of speakers, who hosted events on topics from the ways in which politicians consult scientific sources to criminal justice reform. Thanks to the success of our Summer Fund Drive, we were able to fund a fall event series. These events included talks and panels on topics including cults, climate justice, and end of life care.

One of our largest projects this fall was the production of two guides: one on a humanist approach to end of life, and one on humanist memorials and grief. These guides are available in both print and audio forms, and have been very popular among our membership thus far.

Finally, the BCHA is currently intervening in a case before the Supreme Court of Canada with the intention of ending religious privilege. This is the second time we have undertaken such a large legal pursuit, but it will certainly not be the last.

As we are a nonprofit, all of this would simply not have been possible without the support of our community. We have even more ambitious plans for 2021—you can find all of our goals here—but our ability to set forth on that depends on the success of our End of Year Fundraiser.

That’s where we need our help. Please, help us continue to make BC a more inclusive, compassionate place by supporting us today.