The BC Humanist Association (BCHA) was formed in 1984 and one of its charitable purposes is "to offer and provide meaningful ceremonies to members and non-members at significant times such as marriage and death." To fulfill this, the organization has long considered its options to be recognized to solemnize marriage.

In 2012, the BCHA created its Humanist Officiant Program and submitted an application to the Vital Statistics to register Humanist celebrants. If accepted, it would enable the organization to register representatives to provide customized wedding ceremonies for secular Humanists, atheists and agnostics. This application was based on the precedents set in Ontario and Scotland.

The program is governed by an Officiant Committee Charter and Code of Ethics, which were prepared in consultation with the executives of the officiant programs maintained by Humanist Canada and the Ontario Humanist Society. These documents created a committee of elected Officiants: to ensure that the program adhered to all legislative requirements; to oversee the appointment and training of new Officiants; to oversee the conduct of existing Officiants via the Officiant Code of Ethics; and to handle complaints against Officiants and any resulting disciplinary action.

After almost a year of waiting for a response, the BCHA received a letter from Jack Shewchuck, the CEO of the Vital Statistics Agency, in February 2013 denying their request based on the following rationale:

The denial of the BCHA’s application also included a recommendation that “members of your association make an application under the Marriage Act to become marriage commissioners in the communities in which they reside.”

The letter and Act permitted a 90-day window to appeal the decision to the Supreme Court of BC; however, the BCHA was unable to find pro-bono legal representation in that time and did not have the financial resources to mount a complex constitutional challenge.

Although Humanist officiants in BC are still unable to legally solemnize a wedding ceremony in accordance with a Humanist worldview, they are able to provide the following ceremonies that are not regulated: baby welcoming and naming, coming-of-age, reconciliation, memorials and funerals. In May 2016, the BCHA held its first Humanist Officiant Training session for individuals interested in supporting the non-religious in British Columbia celebrate life’s milestones with the freedom and flexibility of their personalized Humanist values.

Since then, BCHA officiants have hosted a small number of memorials and a naming ceremony. 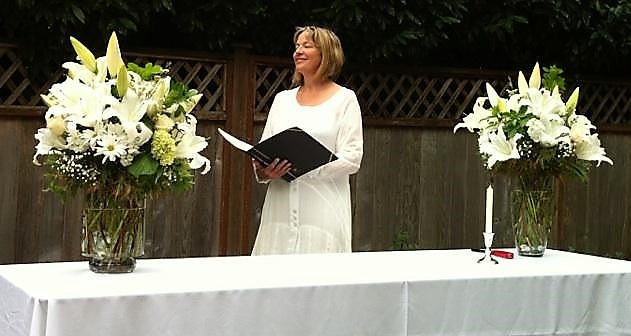 "Katherine Hammond helped me to create a meaningful and very personal ceremony for my son. She had wonderful ideas and was a pleasure to work with and I would recommend Katherine to anyone who is looking to plan a special occasion." - Meaghan E

A Humanist officiants is able to perform a ceremony in BC, provided that a marriage commissioner is hired by the couple and observes the ceremony, which must then also include certain mandatory phrases.

Previous: Marriage in the United States of America
Next: The path forward

Read the 2013 response from Vital Statistics