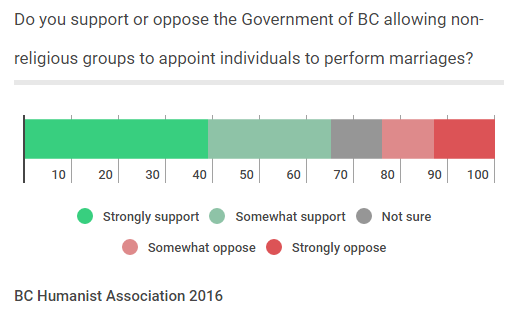 In the BC Humanist Association's June 2016 poll with Insights West, 65% of British Columbians said they support non-religious groups being allowed to appoint representatives to perform marriages, with 39% in strong support. Support was strongest among those ages 18-34, with 55% strongly supportive and 23% opposed.

Without any advertising, the BC Humanist Association also spontaneously receives 5-10 requests per year from individuals asking if we can perform legal marriages or whether we can appoint officiants.

I've performed legal marriages in Vermont and California and I offered to deliver a personal and meaningful ceremony to close friends within my BC community. After extensive research into the regulations, we were required to hire a marriage commissioner who awkwardly sat and watched while I delivered the ceremony. I support the call for BC's marriage laws to be updated to be inclusive of non-religious people. Those of us who are thoughtful-yet-non-religious should have more options to legally minister to our communities in BC.

The BC Humanist Association could challenge Vital Statistics' 2012 rejection of its application registration in court.

Following a rejected application to be registered as a religious organization, the Marriage Act grants a 90-day window to appeal the decision to the BC Supreme Court. While this is long past since the January 2013 rejection, that decision could arguably still be appealed with a request that the time-frame be set aside due to the human rights implications of the case. Alternatively, a new application could be prepared, perhaps in consultation with legal counsel, and an appeal filed if it were again to be denied.

In either case, the goal would most likely be not to establish that Humanism is a religion per se but that interpreting the Act to exclude Humanism is in violation of Section 2(a) of the Charter of Rights and Freedoms and represents the state violating its duty to religious neutrality.

The legal victories won by the Center for Inquiry in the states of Indiana and Illinois provide a clear template for a legal argument. While Canada doesn’t explicitly have an establishment clause, Supreme Court of Canada jurisprudence through rulings like Mouvement laïque québécois v Saguenay clearly set out that Canadian governments have a duty of “religious neutrality” and that no one religion should be privileged in Canadian law.

Similar to CFI’s arguments, the BCHA can argue that the Marriage Act’s restrictions on who may perform marriages are an unconstitutional restriction on the rights and freedoms of the BCHA and its Officiants who wish to perform marriages. The province is granting rights on the basis of belief and creating arbitrary distinctions between religious and secular belief systems.

This is evident in the reasoning given for the BCHA's rejection, which relied on a definition of a religion that is not actually provided in the Marriage Act. For example, the Act does not require religious organizations to have an official dogma, nor does the statement that the BC Humanist Association provides a “valid alternative to existing religions” necessarily mean that it is not itself religious society (within the context of the Act). Additionally, as shown in Vital Statistics' own register, several religious bodies that currently have religious representatives, including the Unitarians, Zen Buddhists and the Canadian International Metaphysical Ministry, do not have an established dogma. Some of those organizations, like the Zen Centre, are explicitly non-theistic philosophies and CIMM exists primarily to certify marriage celebrants.

Further, the suggestion by Vital Statistics that Humanists can simply apply to become marriage commissioners also denies the BCHA equal freedom that recognized religious organizations have. The current workaround - for Humanist ceremonies to be observed by a marriage commissioner - is clearly discriminatory as it paternalizes Humanist officiants in a way that is not required of any religious organization.

This argument potentially enables the BCHA and any prospective Humanist officiants to bring the case forward based on the harm caused to them, rather than a specific couple who may desire a Humanist marriage but is denied that by the law.

The Vital Statistics Agency is a department of the Ministry of Health. There is nothing stopping the Minister of Health from directing the Agency to recognize Humanism as a religion for the purposes of the Marriage Act.

To cement any change in the long term, the BC Legislature could pass an amendment to the Marriage Act to permit Humanist officiants to solemnize marriages. This could be modelled on the exemptions that already exist for First Nations and Doukhobors, or follow either the Australian or Scottish models of non-religious celebrants.

Under the Australian model, the government would reduce the amount of control it operated over marriage commissioners and instead operate the program via a licensing model. Anyone would be free to apply to become a marriage commissioner and would simply be responsible for maintaining their registration. Alternatively, following the Scottish model would mean expanding the category of religious representatives under the Act to include representatives of “belief” systems. These groups would then be subject to the same oversight as existing religious organizations.