Last week we asked in our newsletter and on social media, what you were optimistic about? Here's what you told us. 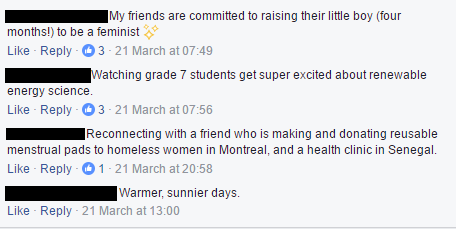 Locally: In Abbotsford, your organization stopped the distribution of Bibles in our public schools.  My and my daughter's high school's grad ceremonies are now held in a public building instead of in a church, and I like to think that my criticisms contributed to the decision.

Generally: I have noticed that research-based substance abuse programs are getting attention on social media.

World politics:  the political right, often aligned with religious fundamentalism, is making a fool of itself.

The Workers' Compensation Board refused to rule on no smoking in loggers' buses until non-smokers outnumbered smokers and then they banned smoking in buses. If the same is true of religion, the US will field admitted atheist political candidates.

Thanks to the others who sent comments in. Let's make this Humanist Spring an optimistic one!