This study examines the prevalence of prayers at municipal council meetings in Ontario since the 2015 Saguenay decision ruled the practice to be unconstitutional. We reviewed municipalities in Ontario with a population over 1000 (n=360). Of the 328 for which data was available for inaugural meetings, 156 (47.6%) opened those meetings with prayer(s) and 21 (6.4%) opened with a ‘moment of silence.’ Data was available for the regular meetings of all 360 municipalities. Of those 9 (2.5%) opened their regular meetings with prayer and 62 (17.2%) opened with a ‘moment of silence.’ Another 8 (2.2%) municipalities opened their regular council meetings with a ‘reflection.’ We provide a qualitative discussion of the types and religiosity of the prayers observed at various councils, from the overtly Christian, to attempts at non-sectarian ecumenicism. We demonstrate the need for greater recognition among Ontario municipalities of the Supreme Court’s clear ruling prohibiting the practice of including prayers in council meetings. We call on those municipalities identified herein to update their practices.

Municipalities with prayers in regular meetings

The variety of practices at these municipalities varied significantly. Laurentian Valley, for example, began each meeting with the Lord's Prayer. Clarence-Rockland's prayer begins “Notre Père” and Whitewater Region's begins with "Almighty God." Others, like Brantford, had arguably secular style invocations that were read out.

Map of all prayers identified

View the map on Google Maps

Change as a result of Saguenay 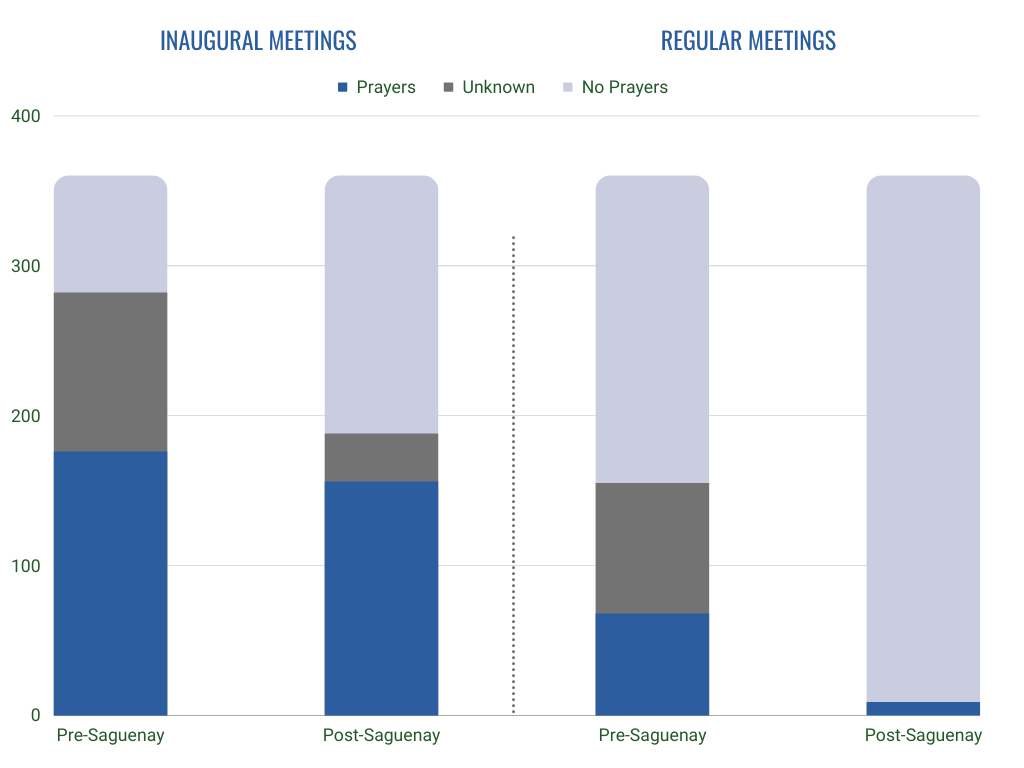 Despite progress, additional action is needed to ensure that municipal council meetings are welcoming to everyone, regardless of religious belief or lack thereof. Specifically:

This is the third in a series of reports from the BC Humanist Association that explore compliance with the Saguenay decision. In compiling these reports, we encourage municipalities to make their council meetings more accessible and welcoming to people of all beliefs and none. Each report follows a similar model and methodology but explores issues specific to the practice relating to ongoing municipal prayer in those jurisdictions.

While our study in municipalities across Canada is ongoing, several emerging trends can be identified: (1) The number of municipalities including prayer in their meetings (regular or inaugural) has declined since Saguenay. Some municipalities responded to the ruling by changing their practices: sometimes abolishing the practice altogether, other times altering or adjusting their procedures. (2) Despite this reduction, prayer continues to be included in some municipal council meetings—particularly inaugural meetings—across the country. (3) These prayers are disproportionately delivered by Christian men.

Our project seeks to highlight violations of the Saguenay ruling with the goal of increasing compliance with the ruling, thereby strengthening the separation of religion and government in Canada and ensuring that all are welcome in municipal council chambers across the country.

After publication, the authors recorded a podcast to discuss the report. Watch that on YouTube or listen on our podcast.