Atheists can be playful too

Atheists can be playful too

Vancouver Sun spirituality reporter Douglas Todd seems to argue for this connection in his latest blog. His post was motivated by a quote from anthropologist David Graeber saying that “physicists are more playful than biologists.” Todd suggests this is echoed by opinion surveys that show “physicists are more likely than biologists to believe in some form of transcendent reality, which some might call God.”

Except Todd doesn’t reference any surveys that show that.

The Pew Research Center on Scientists and Belief in 2009 found that 41% of biological and medical scientists do not believe in God or some higher power compared with 46% of physics and astronomy scientists.

Meanwhile, a 2007 paper in Social Problems by Ecklund and Scheitle looked at “Religion among Academic Scientists: Distinctions, Disciplines, and Demographics.” It also found little difference between disbelief among biologists and physicists (both about 41% atheists). 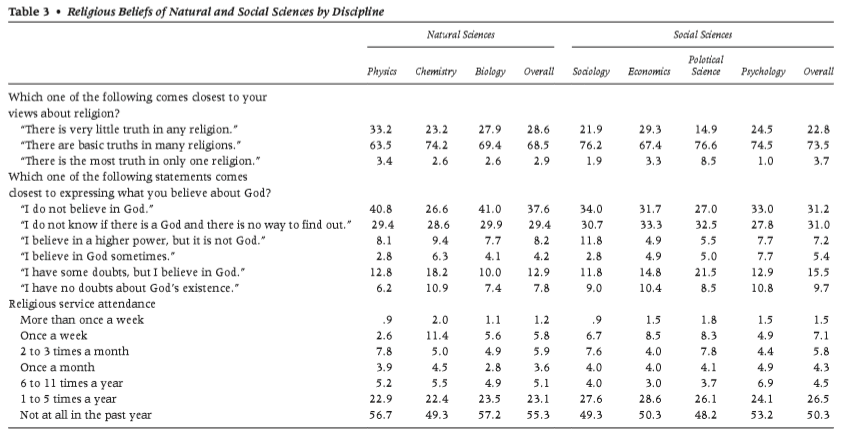 And while there are many more surveys on scientists’ beliefs, I’m not actually aware of any that put religiosity greater among physicists than biologists.

But regardless of the (potentially minor) differences in disbelief among scientists, there is one critical point that Todd leaves out, which is found in every one of these surveys: Scientists are significantly less religious than the general population. If we're going to talk about religiosity among scientists, we should at least acknowledge that we're starting from a low baseline.

Todd ends his blog referring to discussions he’s had with Alistair McGrath (who Richard Dawkins has compared to a flea upon his back). Based on these discussions, Todd argues that the Big Bang “opens the possibility of some entity in the universe brings life out of chaos [sic]”. However, as shown above, there are few religious physicists and I suspect that most would ask the obvious question: Where did that “entity” come from?

Now let’s get back to Graeber’s quote. His full essay appears on The Baffler and discusses the idea of play from a scientific angle. Here’s the full paragraph that Todd quotes from.

Physicists are more playful and less hidebound creatures than, say, biologists—partly, no doubt, because they rarely have to contend with religious fundamentalists challenging the laws of physics. They are the poets of the scientific world. If one is already willing to embrace thirteen-dimensional objects or an endless number of alternative universes, or to casually suggest that 95 percent of the universe is made up of dark matter and energy about whose properties we know nothing, it’s perhaps not too much of a leap to also contemplate the possibility that subatomic particles have “free will” or even experiences. And indeed, the existence of freedom on the subatomic level is currently a heated question of debate.

The dig at religious fundamentalists is suspiciously missing from Todd's blog, ironically when he's trying to make a point that physicists are actually religious. Maybe it was missing from the longer piece in Process Studies that Todd pulled Graeber's quote from, but that article's not available online (or at least Todd didn't link to it in any case).

It strikes me that this argument that playful physicists must be more religious comes from the “angry atheist” stereotype. The New Atheists (Dawkins, Sam Harris, and the late Christopher Hitchens among others) rose to fame on their strong criticisms of religious belief. This led many to caricature them as militant and angry.

So the idea that an atheist could be happy and even playful directly contradicts that characterization. Therefore, I can understand how someone wanting to defend religion would be tempted to argue that the playful scientists are actually more religious and it’s just the miserly biologists who can't accept God.

In my personal experience, having studied engineering physics in undergrad and physics in graduate school and founding a student group for atheists, hard science students do tend to be less religious and are still having just as much fun as everyone else. Even the atheist biologists I've known aren't that miserly.

So instead of Todd’s column, I’d recommend you have some fun, and if you have the time, read Graeber’s full essay, What’s the point if we can’t have fun?