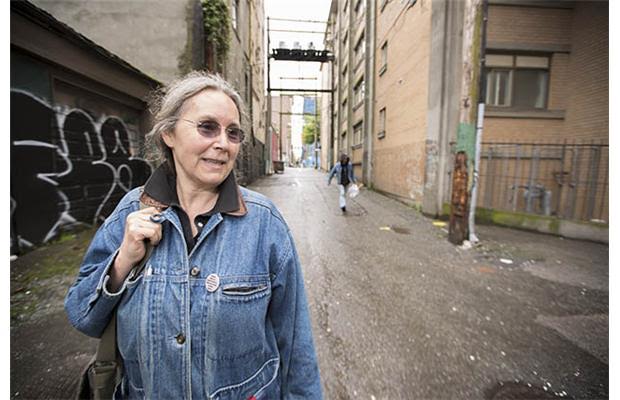 Compassion, Action & Civil Disobedience in the Face of a Crisis in Vancouver’s Downtown Eastside

In September, 2016, three women were so concerned about the growing fentanyl overdose crisis that they set up a tent & table in an alley behind the DTES Market they managed. In potential violation of the law, they set up a drug injection/ consumption site in Vancouver's Downtown Eastside to combat the many overdose deaths.

About Ann: Ann Livingston is a creative, energetic and focused community organizer, who has made significant contributions to improving access to health care for people who use illegal drugs at the local, regional and national levels. After co founding the Vancouver Area Network of Drug Users (VANDU) with poet/ activist Bud Osborn in 1998, she was employed as VANDU,s executive program director for 10 years. She encouraged people who use drugs, who are criminalized and labeled mentally ill, to form citizen associations and insist that they design and implement harm reduction programs. Consequently, VANDU had, and continues to have, a major influence on the public dialogue around heroin, cocaine, crystal meth and crack use and the people who are users of these illegal substances. After many years of advocacy, public education, marching in the streets and civil disobedience, Vancouver finally has a government sanctioned injection site and is hosting a second heroin prescription trial. In her current role as a volunteer with the BC Yukon Association of Drug War Survivors, Ann is meeting with marginalized, homeless people who use illegal drugs in Surrey and Abbotsford where bylaws have been implemented banning harm reduction services for drug users.

Through her work, she has inspired community organizers, civil rights lawyers, and health professionals to view despised and excluded people who use illegal drugs as citizens deserving of compassion, health care and human rights. More importantly she works alongside drug users so that they themselves believe themselves worthy and demand their citizenship.

She actively demonstrates innovative ideas in organizing and acts as a role model and mentor.

Ann has promoted the formation of several non profits set up to ensure drug users are ready, organized and self governed when opportunities to end the senseless tragic deaths from preventable Hep C, HIV and illicit drug overdose arise. These include the BC Association of People on Methadone, the Western Aboriginal Harm Reduction Society, the BC Yukon Association of Drug War Survivors and the Canadian Association of People who Use Drugs. Ann is also a board member of the Pacific Hepatitis C Network and recently served on the boards of the Downtown Eastside Neighborhood Council, the DTES Market Society and the Overdose Prevention Society. She lives at the Four Sisters Housing Co Op in the DTES of Vancouver with her young son and her oldest son who has cerebral palsy. The impact of her leadership has been transformative - opening 4 unsanctioned drug consumption sites since 1995 she put intense pressure on the police, the mayors, the health authority and the minister of health to change policy.

Ann has devoted time as a volunteer to the community advisory boards of the Vancouver Injection Drug User Survey, the NAOMI & SALOME Heroin Trials, the Regional HIV Prevention Committees for Fraser and Vancouver Coastal Health. Ann was central ensuring the policy of 1 for 1 Needle Exchange change to Needle Distribution & Collection as well as seeding drug user groups for people who smoke crack, people who drink illegal alcohol, women who use drugs and survivors of the heroin prescription programs.

Ann’s leadership makes a lasting impression. She exemplifies what a caring compassionate neighbour can be. She has strong convictions and principles and is grounded by her passion for organizing citizens to solve community problems rather than creating a wasteland of services and clienthood.

Click here for more details on how to find the Centre. Our events are independent of the Seniors' Centre and are open to people of all ages and backgrounds.