While Humanism doesn’t technically qualify as a faith (i.e. a belief based on no evidence or in spite of the evidence), the BC Humanist Association was featured in yesterday’s edition of The Province on their Sunday Faith feature. 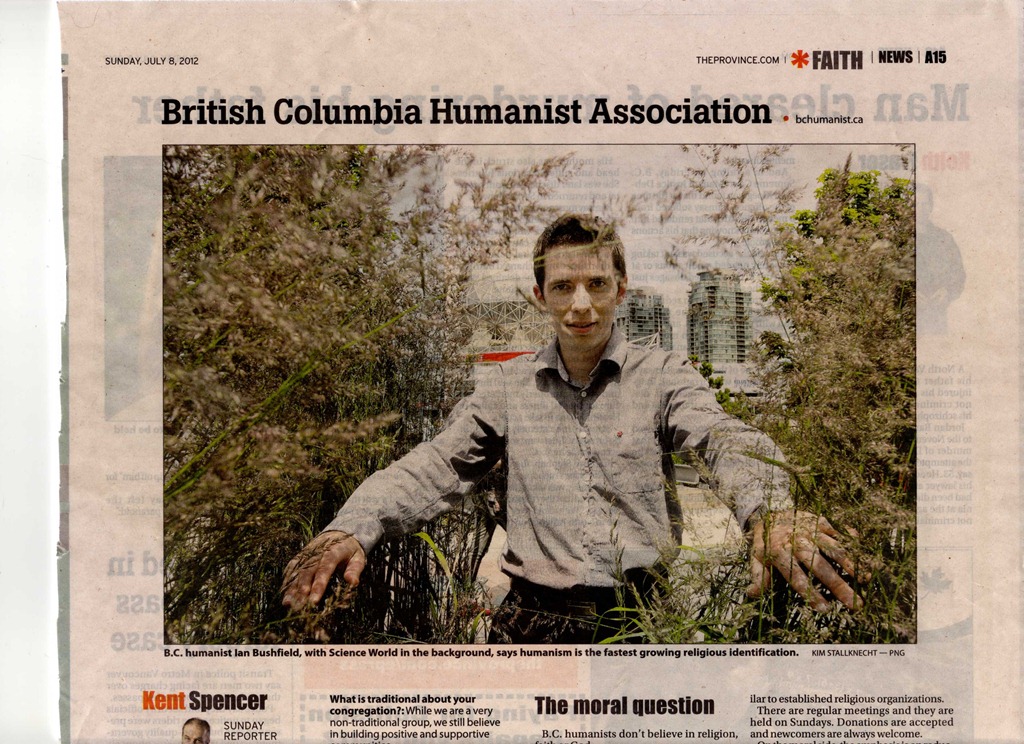 They believe science provides explanations and humans are capable of understanding the answers without the aid of higher beings.

“We believe in the ability of ourselves to live moral, self-fulfilling lives,” says Ian Bushfield, youthful executive director of the B.C. Humanists.

“There’s just no evidence of God,” he says.

Bushfield, 26, who is the non-profit society’s first employee, is tasked with building a program.

B.C. Humanists are a relatively small “community” who have been around since the 1980s.

They don’t believe in magic, miracles or walking on water.

“We’re a very skeptical bunch. We want to see proofs and arguments,” says Bushfield, 26, a physicist who once founded an atheists club at the University of Alberta.

“For instance, people should be able to get help with drug addictions without having to submit to a higher power, like you do in some self-help programs,” he says.

He believes the Bible has “cultural, literary and historical value,” but calls it a work of fiction.

“There are no revelations in humanism. We won’t write a book because someone heard a voice,” he says.

There are regular meetings and they are held on Sundays. Donations are accepted and newcomers are always welcome.

On the moral side, the emphasis is on reducing harm, like other religions, but directives include ones for human rights, freedom of speech and peaceful relations.

The biggest departure from traditional religion comes when answers are sought to the profound questions concerning mankind’s existence.

Humanists believe the universe was created by something called the Big Bang, where everything came together in an instant 13.7 billion years ago. [The theory doesn’t seem to address what came before the Big Bang.]

On the big questions, Bushfield has this to say:

“We are here because of random processes and luck.

“The purpose of life is so we can create for ourselves.

“Humanists believe in the power of people to be good,” he says.

If the responses seem hollow or lacking, Bushfield says the sense of wonder is to be found in things like space-based telescopes which glimpse fantastic sights.

Bushfield believes the scientific story is way more fascinating than the creation story.

“The religious story only takes a few pages in the Bible. It isn’t enough,” he says.

“We’re trying to find a niche for a community which doesn’t involve a church. It can be a place for people in Vancouver who want to make friends. We’re good, moral, ethical people.”

Religion: Secular Humanism (not considered by all to be a religion)

Message in a tweet (140 characters): A progressive world view informed by science, inspired by art and motivated by compassion.

How many people attend services? 30-50

What is traditional about your congregation? While we are a very non-traditional group, we still believe in building positive and supportive communities.

What is modern? The fastest-growing religious identification in Canada is the non-religious. Our world view is constantly re-evaluated in light of the latest discoveries.

What might people be surprised to know about? Both Dr. Henry Morgentaler and Pierre Elliot Trudeau belonged to the Humanist Fellowship of Montreal.

What is the most beautiful thing about your church/temple/place of worship? I’ll offer a beautiful rephrasing of Darwin: “Humanists see beauty in the simple laws of the world that give rise to such stunning magnificence.”

Overall I think it was a fairly positive piece that reflects well on what our group and humanism is all about… except that little bit about “something called the Big Bang.” Dane Praed submitted a nice rebuttal to the journalist that I’ll include here:

Kent, you write that as though you consider it to be a fringe theory held by a few odd individuals. Please choose your words more carefully.  I’m hoping that was just a little tongue-in-cheek. In the extremely unlikely event that it wasn’t though, please read the following from Wiki. And as for the verging-on-snide comment in parenthesis about what happened “before” the event, obviously there was no “before” as time and space both began with the Big Bang. Granted it’s an extremely difficult concept for us to get our minds around but there’s an explanation for that too.