The latest poll from Leger Marketing [pdf] asked the standard “who will you vote for” type questions, but then dug deeper to try to expose a difference between Quebec and the rest of Canada. One question in particular sparked my interest. They asked “Do you personally consider yourself as a person who is religious?” and showed that a mere 22% of Quebeckers agreed versus 36% of Canadians. I transcribed their data to a graph to better illustrate the regional breakdown of religiosity in this country. 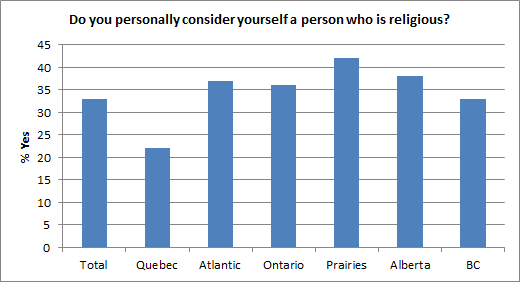 There are a few interesting things to note here (at least for me).

First, no where in Canada do people consider themselves to be predominantly religious. Although we (unfortunately) do not have the corresponding response for the number of self-professed secularists (many will consider themselves neither religious or secular, just as in the poll many do not consider themselves right or left-leaning). Even supposedly religious bastions of Alberta and the prairies only slightly tug the rest-of-Canada average up. In general, only 1-in-3 Canadians actually identify as religious.

Next, we can see that BC nicely fits the national average, actually coming in second only to Quebec for the title of least religious province. This shouldn’t be a surprise from census data which puts the number of non-religious in BC at 35%, a number that is nearly a decade old. Note that between 1991 and 2001 the percentage of non-religious in BC grew by 5%.

Finally, Quebec has long been considered the Catholic province but in reality the province has shifted to a more nuanced Secular Catholicism, where they retain the culture of their history but adopt a more humanistic ethics toward human rights.

All-in-all I think this is a hidden gem of data for those who want to see a more secular Canada.