When the Abbotsford School District agreed in June to end its policy of distributing Gideon Bibles and religious materials to students, we thought we'd settled this issue in British Columbia.

Unfortunately, we recently learned that SD 27 (Cariboo-Chilcotin) continues to allow the Gideons to use public schools to distribute their bibles.

We challenged SD 27 to end its policy and, just as I was about to hit send on this newsletter, the District called and confirmed they would not permit the distribution of Gideon Bibles in SD 27!

We need to keep up these victories. We've now also asked every other district in BC whether they are still distributing Gideon Bibles. Please consider making a donation before the end of 2016 so we can continue to investigate other districts and start our work on independent schools. 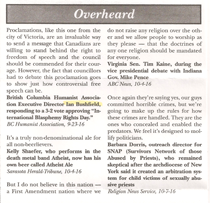 The Freedom From Religion Foundation, the largest organization for non-theists in the USA, covered our recent success in getting the City of Victoria to proclaim International Blasphemy Rights Day.

As well, the petition that many of you signed earlier this year calling on Parliament to repeal Canada's blasphemy law has been tabled in the House of Commons. The government now has less than 45 days to issue its response and we'll be sure to share that with you as soon as its available.